Two former Minneapolis police officers who were convicted of violating George Floyd’s civil rights were sentenced to prison by a federal judge on Wednesday.

All four of the officers involved in the incident, which sparked nationwide violent riots, have now been convicted and sentenced.

Kueng and Thao were found to have deprived Floyd of his constitutional right to be free from an officer’s unreasonable force when they “willfully failed to intervene” to stop former Minneapolis Police Department Officer Derek Chauvin’s “use of unreasonable force.”

The jury additionally determined that the two former officers deprived Floyd of his constitutional right to be free from a police officer’s deliberate indifference to serious medical needs when they saw him in need of medical care, but did not offer aid.

“Former officers Thao and Kueng each had an individual duty and opportunity to intervene in the excessive force that resulted in the agonizing death of Mr. Floyd, but both men failed to take any action,” said U.S. Attorney Andrew M. Luger for the District of Minnesota in a press release from the Department of Justice. “These sentences reaffirm that every law enforcement officer, whether rookie or senior, has an affirmative duty to protect individuals in their custody.”

Former Officer Thomas Lane was also found guilty, by the same jury, of depriving Floyd of his constitutional right to be free from a police officer’s deliberate indifference to serious medical needs, resulting in bodily injury to Floyd and his death. He was sentenced to 30 months in prison on July 21.

The former cop who had infamously held his knee on Floyd’s neck while restraining him, Derek Chauvin, also pleaded guilty to depriving him of his constitutional rights in violation of the same federal statute. He was sentenced to 252 months in prison on July 7.

“All four officers involved in the tragic death of George Floyd have now been convicted in federal court, sentenced to prison and held accountable for their crimes,” said Assistant Attorney General Kristen Clarke of the Justice Department’s Civil Rights Division.

“George Floyd’s death could have been prevented if these defendants had carried out their affirmative duty to intervene to stop another officer’s use of deadly force,” Clarke continued. “While these defendants have now been held accountable, law enforcement officers and leaders must take seriously the affirmative duty under the Constitution to intervene to stop misconduct by fellow officers and the duty to render medical aid. The federal prosecution of all officers tied to the death of George Floyd should send a clear and powerful message that the Department of Justice will never tolerate the unlawful abuse of power or victimization of Americans by anyone in law enforcement.” 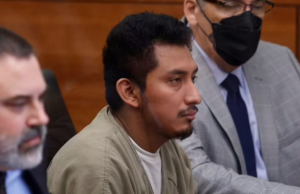