Facebook launched a feature that will let users say if they have prayed in response to a post.

The feature, which the social media giant began testing in December, allows users to click the “I prayed” button in response to a post.

In a statement attributed to a company spokesperson, Facebook said the new feature was part of an ongoing effort to support faith communities.

“During the COVID-19 pandemic we’ve seen many faith and spirituality communities using our services to connect, so we’re starting to explore new tools to support them,” it said.

The tool was made available to Facebook Groups in May.

For Crossroads Community Church, the function went live about 10 weeks ago in its Facebook Group. The nondenominational congregation in Vancouver, Washington has about 2,500 page members.  Gabe Moreno, executive pastor of ministries, says between 20 to 30 prayer requests are posted each day. He notes a post receives about 30 to 40 responses apiece.

Users who respond to prayer requests by clicking “I prayed” can set notification reminders to pray again the next day.

While some religious leaders view the tool as an asset for those seeking support through prayer, others fear the potential misuse of sensitive information.

“As long as these companies initiate proper precautions and protocols to ensure the safety of religiously marginalized communities, people of faith should jump on board supporting this vital initiative,” Adeel Zeb, a Muslim chaplain at The Claremont Colleges in California, said in a statement.

Rev. Thomas McKenzie, who leads Church of the Redeemer in Nashville, Tennessee, told AP News that “he views Facebook as willing to exploit anything for money, even people’s faith.”

Even so, he acknowledged that the prayer tool could be beneficial: “Facebook’s evil motivations might have actually provided a tool that can be for good.”

“Under its data policy, Facebook uses the information it gathers in a variety of ways, including to personalize advertisements. But the company says advertisers are not able to use a person’s prayer posts to target ads,” reports AP News.

Religious attendance in America was thrown off course when pandemic lockdowns went into effect. While their members could not attend in person, churches and synagogues began live streaming their services online. A Pew Research Center study reported that “roughly one-in-eight U.S. adults (12%) say they attended religious services in person during the last month, and one-in-three say they have watched religious services online or on television.”

“Early in the pandemic, Facebook sent ‘starter kits’ of equipment like small tripods and phone holders to faith groups for live-streaming and shooting content as places of worship closed down. It launched a faith resources website with e-learning courses and quizzes on best practices, touting that ‘the people your house of worship wants to reach are on Facebook platforms already,’” reports Gulf Today.

A platform-wide debut date for the “I prayed” button has not been announced at this time. 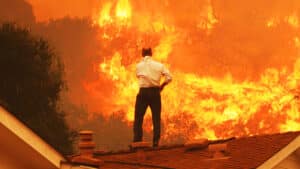