A new report from the United Nations is raising alarms among environmentalists and climate change activists across the globe this week, with data allegedly showing the impact of global warming cannot be reversed “over the next 30 years.”

“Nations have delayed curbing their fossil-fuel emissions for so long that they can no longer stop global warming from intensifying over the next 30 years, though there is still a short window to prevent the most harrowing future, a major new United Nations scientific report has concluded,” writes the New York Times.

Global warming will get progressively worse and cannot be stopped over the next 30 years, a major new UN report has concluded, because the world's nations delayed so long in curbing emissions. A hotter future is now essentially locked in.https://t.co/tMnu8VJMpo

“Humans have already heated the planet by roughly 1.1 degrees Celsius, or 2 degrees Fahrenheit, since the 19th century, largely by burning coal, oil and gas for energy. And the consequences can be felt across the globe: This summer alone, blistering heat waves have killed hundreds of people in the United States and Canada, floods have devastated Germany and China, and wildfires have raged out of control in Siberia, Turkey and Greece,” adds the newspaper.

“It’s not like we can draw a sharp line where, if we stay at 1.5 degrees, we’re safe, and at 2 degrees or 3 degrees it’s game over,” said Robert Kopp, an environmental scientist at Rutgers University. “But every extra bit of warming increases the risks.”

Democrats in the United States are calling for trillions in new spending on programs like the Green New Deal to promote clean energy and reduce the impact of fossil fuels. 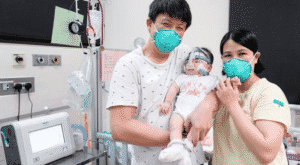 'World’s Smallest Infant' Discharged After One Year in Hospital