'World’s Smallest Infant' Discharged After One Year in Hospital

The baby weighed 7.47 ounces at birth

In Singapore, a baby once called the “world’s smallest infant” has been discharged from the hospital after 13 months.

Kwek Yu Xuan weighed 7.47 ounces (212g) and measured a little over 9 inches (24cm). She was born on June 9, 2020, via emergency cesarean section at Singapore’s National University Hospital. Four months premature, she was born 24 weeks and 6 days of gestation.

She was roughly the size of a hamster or a large apple.

“Despite being given a limited chance of survival at birth and the complexities of treating such an extremely small baby, last month she left hospital weighing 6.3kg,” says The Times.

According to the Tiniest Babies Registry, which is managed by the University of Iowa, the previous smallest survivor was an American baby girl born in May 2019. She weighed 245 grams at birth.

Newsweek reports that “the 14-month-old infant has chronic lung disease and pulmonary hypertension — two conditions that are often associated with extreme prematurity — and has to be on a ventilator at home, although the hospital said she is expected to get better with time.”

Dr. Yvonne Ng was the neonatal consultant on duty when Yu Xuan’s mother was admitted to the hospital for preeclampsia.

“The first thing that I remember was the difficulty in putting a breathing tube into her. She was so tiny that we had to use a smaller sized tube, 2mm in diameter. The doctor who did it, she had to use her fingers to pry open her mouth gently and put it in, it was quite special,” she said to CNA.

CNA reports that “the total cost of Yu Xuan’s stay was about S$230,000 … A Give.asia crowdfunding campaign that she launched last year raised S$366,884 for her baby’s case.” After paying their medical bills, the baby’s parents kept S$56,000 “to fund the rest of Yu Xuan’s treatment and recovery” and then “donated S$50,000 to Give.asia to help other families in need.”

Premature babies born at 24 weeks have a survival rate of roughly 70%. The World Health Organization estimates that 15 million infants are born prematurely every year. The organization says that “across 184 countries, the rate of preterm birth ranges from 5% to 18% of babies born.” 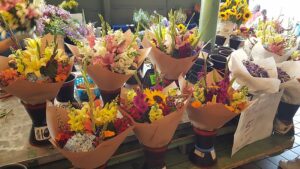 Maine Senator Wants Government to Use Only US-Grown Flowers