More than 250,000 mentions of abortion medication appeared on the sites in the days following the overturning of Roe v. Wade

Posts offering abortion pills have been removed from Facebook and Instagram after flooding the platform following the Supreme Court’s decision to overturn Roe v. Wade.

Images and statuses explaining how women could obtain the pill as well as offers to mail the item to women in states that have restricted its distribution are all being limited by the Meta-owned social media platforms.

The end of Roe, the 1973 decision that made access to abortion a federal right, was widely denounced by pro-abortion advocates. Thousands gathered outside the Supreme Court following June 24 opinion day to object to the justice’s decision to return the right to regulate abortion to the individual states.

Those concerned about losing access to abortions encouraged others online to acquire pills that induce abortions in case they became restricted by new state laws.

The firm has recorded over 250,000 mentions of the terms by June 26 — around 48 hours after the court’s decision was released.

Meta had previously banned its employees from discussing the fate of Roe v. Wade on company messaging platforms and deleted messages that violated the policy.

The New York Times reported that employees were told by the company’s management staff that discussing the state of abortion access in the United States violated a company policy that established “strong guardrails around social, political and sensitive conversations.”

“On our internal Workplace platform, moderators swiftly remove posts or comments mentioning abortion,” said Meta software engineer Ambroos Vaes on LinkedIn. “The ‘respectful’ communications policy that was put in place explicitly disallows it. Limited discussion can only happen in groups of up to 20 employees who follow a set playbook, but not out in the open.”

Meta has said it plans to cover the travel cost of employees who travel out-of-state for abortions.

“We are in the process of assessing how best to do so, given the legal complexities involved,” said a company spokesperson on June 24, per Fast Company.

Andy Stone, the Policy Communications Director at Meta, said on June 28 that the company’s terms of service do not permit “content that attempts to buy, sell, trade, gift, request or donate pharmaceuticals.”

“Content that discusses the affordability and accessibility of prescription medication is allowed,” Stone added on Twitter. “We’ve discovered some instances of incorrect enforcement and are correcting these.”

Content that attempts to buy, sell, trade, gift, request or donate pharmaceuticals is not allowed. Content that discusses the affordability and accessibility of prescription medication is allowed. We've discovered some instances of incorrect enforcement and are correcting these. 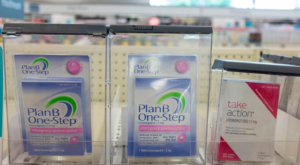