EXCLUSIVE: Fauci's NIAID Confirms They Own All Monkeys Bred on South Carolina Island to be Tortured

The National Institute of Allergy and Infectious Diseases (NIAID) has confirmed that they own all monkeys bred on South Carolina’s Morgan Island to be used for animal testing.

As Timcast previously reported, photographs and details obtained by White Coat Waste Project reveal the extent of the taxpayer funded cruelty and lack of regard for the well-being of these highly intelligent animals.

NIAID has now responded to questions sent by email, prior to our initial report.

Approximately 600 monkeys are taken from Morgan Island per year and shipped to some of the federal government’s most painful and cruel laboratories for animal research.

As of June 30, 2019, there were 3,044 primates living on Morgan Island, with 77% of the population being females, according to documents obtained by White Coat Waste Project through a Freedom of Information Act request. It is estimated that approximately 750 newborn monkeys are born on the island to await their potential use for vivisection each year.

Timcast has obtained a new document that reveals that in 2020 the number of monkeys on Morgan Island increased to 3,521 primates. 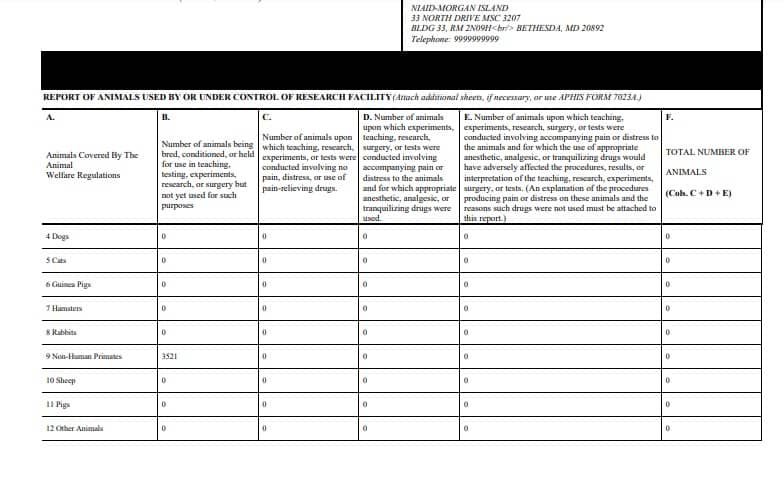 The island has been managed for the National Institute of Allergy and Infectious Diseases by Charles River Laboratories, one of the largest suppliers of laboratory animals in the world, since 2007.

“The island is currently owned by the South Carolina Department of Natural Resources and leased by Charles River Laboratories, Inc., as part of a contract with NIAID. The nonhuman primates raised on Morgan Island are owned by NIAID,” NIAID confirmed in their email to Timcast.

According to federal spending databases, a total of $13.5 million of a potential $27.5 million contract has been given to Charles River Laboratories to maintain the monkey island colony since March 2018. A sizable chunk of those funds, $8.9 million, was paid by Dr. Fauci’s division (NIAID) of the NIH.

“As a pathologist with expertise in how disease affects human patients, I can say with certainty that infecting nonhuman primates with painful and debilitating illnesses with the goal of curing humans is not just cruel, but it’s incredibly wasteful. The NIH should stop squandering tax dollars on wasteful and cruel primate testing that doctors like me cannot use to actually help people,” Tiffani Milless, MD, FCAP, WCW medical adviser told Timcast.

The NIAID spokesperson stated that they would get back to us with more information about this funding, but had not sent a follow up five days later.

“As NIAID just confirmed, the Island of Dr. Fauci is not science fiction, but a real-life nightmare for taxpayers and primates, who are bred to die excruciating deaths in wasteful maximum pain experiments that cause hemorrhaging, brain damage, bleeding and multi-organ failure. From #BeagleGate to #MonkeyIsland, the waste keeps getting worse and most taxpayers want Fauci’s government monkey business to stop,” Devin Murphy, Public Policy and Communications Manager at taxpayer watchdog White Coat Waste Project told Timcast.

According to documents obtained by WCW, Charles River is tasked with “the year-round daily maintenance of a non-human primate (NHP) breeding colony. […] It is anticipated that the number of animals provided by the Government should produce a minimum of 500 animals per year for the Government’s use.”

A 2018 NIAID paper describes the development of the deadly Crimean-Congo Hemorrhagic Fever (CCHFV) in monkeys in very graphic detail. White Coat Waste has also provided Timcast with photos of one of the monkeys that was infected with the virus. The horrific photos were originally published as a supplement to the paper.

The agency used fifteen rhesus and African green monkeys for the pilot study. They used a dozen macaque monkeys in the main study, where they were injected with the painful virus. They were killed on the seventh day of the test.

“The study investigated Crimean-Congo hemorrhagic fever (CCHF), a viral disease spread by ticks in the Middle East, Asia, Africa and parts of Europe. Infection with CCHF virus is fatal in nearly one of every three cases. No specific treatments or vaccines for CCHF exist, primarily because a suitable animal model for studying the disease has not been available. This study was done to develop a suitable model for scientists to learn how the virus infects, progresses and interacts with the immune system,” they continued. “Ultimately, scientists hope to use the animal model to develop treatments and vaccines for CCHF.”

There does not appear to have ever been any reported cases of the virus in the United States.

Though NIAID has recently attempted to publicly distance themselves from cruel animal testing by stealth editing their funding efforts out of research documents, the paper plainly states (as of November 16, 2021), “We thank the staff of the Rocky Mountain Veterinary Branch, Division of Intramural Research (DIR), National Institute of Allergy and Infectious Diseases (NIAID), National Institutes of Health (NIH) for assistance with animal care and clinical and pathological veterinary services, and Atsushi Okumura for veterinary expertise throughout the study. We would also like to thank the members of the Visual and Medical Arts (DIR, NIAID, NIH) for aid in figure development. This work was funded by the Intramural Research Programme of the NIAID, NIH.” (Emphasis added).

Asked about their maximum pain testing, NIAID claimed that they do take steps to limit the amount of pain inflicted on the animals.

“Every animal study proposal (ASP) must be reviewed by an Institutional Animal Care and Use Committee (IACUC), and each of those proposals is evaluated for painful or stressful procedures as required by federal law. The avoidance or minimization of discomfort, distress, and pain is a key consideration during the committee’s review,” the agency said. “Procedures with animals that may cause more than momentary or slight pain or distress must be performed with appropriate sedation, analgesia, or anesthesia. It is up to each individual IACUC whether an ASP is approved or denied.”

The USDA Pain Column E requirement includes, “all animals that experienced more than slight or momentary pain or distress that could not be relieved for study-related reasons.”

Examples of tests that fall under this category, according to the USDA, include “chair-restraint of a NHP (non-human primate) that has not been conditioned for the time period of restraint,” “drug or radiation toxicity testing producing unrelieved pain and/or distress,” “exposure of an animal to an agent which produces unrelieved pain and/or distress,” and “exposure of an animal to electrical shocks that are generally accepted as causing pain in humans.”

Experiments conducted by NIAID under this category include infecting primates with Ebola and other hemorrhagic viruses, Tuberculosis, or inducing sepsis; and more recently, modeling SARS-CoV-2 on different primate species.

Excerpts from NIH documents detail some of the horror that these primates endured before their deaths.

“Ebola Virus infection may result in uniform lethality. Filoviruses cause a viral hemorrhagic disease which rapidly progresses from onset and includes high fever, anorexia, and recumbency, development of petechial and/or macular rash, coagulopathy and multi-organ failure. It is likely that the animals will experience some discomfort because of the virus, additional discomfort may result from the animals’ immune response to the infection,” explained one document.

Another noted that “animals infected with Ebola virus will experience pain and distress and the infection is expected to be lethal in non-protected animals.”

“Infection with the Lassa virus (Josiah) is 100% lethal in Cynomolgus macaques within approximately 14 days post challenge. Signs of illness can include fever, rash, diarrhea, bleeding and malaise prior to internal hemorrhage and multi-organ failure leading to death. The animals in some of the vaccinated groups may, and the control animals will, experience symptoms of Lassa virus infection,” researchers reported in yet another document detailing their work.

A study they conducted on Nipah virus said that the animals were in such bad shape between the sixth and ninth days post infection that they needed to be killed at that point to avoid being inhumane.

“Upon inoculation with Nipah virus animals develop clinical signs of disease. These signs may include weight loss, respiratory and neurological disorders. […] Control animals inoculated with Nipah virus-Bangladesh normally meet humane endpoint criteria between the evening of 6 dpi and the morning of 9 dpi,” the study reported.

While studying the Lassa virus, they allowed the macaque monkeys to suffer until they died from being infected. They wrote that “infection of cynomolgus macaques with Lassa virus will cause clinical disease and non-protected animals will ultimately succumb around day 8-17.”

The primates from Morgan Island have also been used for testing related to AIDS, polio, and even bio-terrorism. Only researchers and officials are allowed on the secretive island, which sits at 32.4774º N and 80.5195ºW. The public is banned from entering.

Commenting on the cruel tests, the founder of Small Primate Animal Rescue TN, Michael Robison, told Timcast that “once again, the powers that be are exploiting these animals for their own gain. In the end, these tests are ineffective. They are not curing or alleviating any sickness. They’re just collecting data — and data points equal dollars.” 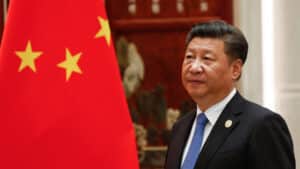 US Officials on China And Russia Hypersonic Tech: 'We're Not As Advanced'