Ye and the former president have both announced their intentions to run for the White House in 2024.

The dinner between Ye and Trump had been previously arranged, but the additional guests were brought on by author and political commentator Milo Yiannopolous — who has been named by the fashion and entertainment mogul as his campaign director.

On Thursday evening, Ye shook up Thanksgiving when he tweeted a video featuring a discussion between himself and Yiannopolous about the meeting.

“When he didn’t know where the lawyers is, you’ll still have your loyalist,” Ye said, seemingly ad-libbing a line that would have fit perfectly into one of his hit songs.

Ye continued, “when all the lawyers said ‘forget it, Trump’s done,’ the loyalists were running up on the White House.”

The rap icon explained that he questioned the former president about not pardoning people who were arrested for protesting on his behalf on January 6 and suggested that he bring back the people who worked on his 2016 campaign — but have since been canceled.

Ye said that Trump attempted to change the subject to his pardoning of Alice Johnson, a grandmother who had been serving life without the possibility of parole for non-violent drug offenses. The woman’s freedom had become a passion project for Kim Kardashian.

Trump, according to Ye, had said that pardoned her for him, not Kardashian.

Things at the dinner began to unravel when Trump insulted Kardashian, the mother of Ye’s children.

“When Trump started basically screaming at me at the table, telling me I’m going to lose — I mean, has that ever worked for anyone in history?”

“I’m like hold on, you’re talking to Ye,” the candidate said at the end of the video.

According to a source familiar with the events at the dinner, who asked to remain anonymous, Ye had arrived at Mar-a-Lago with Giorno, who served as Trump’s Florida chief strategist in 2016 and later a senior advisor for his campaign, as a power move to show that he is serious about his White House bid.

Giorno has worked for multiple presidents and is regarded as highly formidable at running campaigns.

Though several reporters are citing “anonymous sources” to claim that Fuentes was not present at the dinner, multiple people have confirmed to Timcast that he was, including Yiannopoulous and Giorno.

Trump was not given a heads up Kanye would be bringing Fuentes with him to Mar-a-Lago and Trump did not meet Fuentes while he was there, according to a person familiar.

“Nick attended the dinner and sat across from the president. I sat to the president’s right and Ye to his left,” Giorno said. “The president was by himself for dinner but invited Ye to meet some people on the patio.”

Giorno said there were at least seven other tables with people having dinner nearby.

“We had a traditional turkey dinner, which wasn’t on the menu,” Giorno told Timcast. “It was delicious — Ye had seconds of the stuffing.”

Yiannopolous, according to the source, sent Giorno as a signal to Trump that Ye is serious about his campaign and working with people that normally would have been expected to be in the former president’s camp. Fuentes was sent as a power play, as the firebrand commentator would typically never be allowed past the gatekeepers and into Mar-a-Lago to speak to the president.

“Halfway through the dinner, Trump gets a call,” the source told Timcast. “When he comes back, the whole tenor of the dinner changes, and he starts ranting about Kim Kardashian, saying that she’s ‘disgusting’ and all the rest of it. Ye just looked around the table and said, ‘that’s the mother of my children that you are talking about.'”

By this point, the whole meeting was becoming a disaster.

“Trump starts getting edgy, antsy, fidgety — and angry. He can’t get them out of there fast enough,” the source said.

“When they get up to leave, there is an enormous line of people who want photos with Ye, and not a single one of them asked for one with Trump alone,” the source said. “Trump was just kind of allowed to join in some of them. By the end, Trump was like, ‘is the car here? Is the car here? Where’s their car?'”

The source said that the evening began with Trump seemingly trying to “neutralize Kanye,” but the mogul was of the mindset of “you don’t have anything for me, and you’re not offering me anything, so I don’t know what we’re doing here — but thanks for dinner.'”

Though Trump allegedly flew off the handle at Ye, he was “dazzled” by Fuentes, Yiannopolous told Timcast.

Fuentes, once an avid Trump supporter, is rumored to be in line to serve as the communications director for the YE24 campaign. 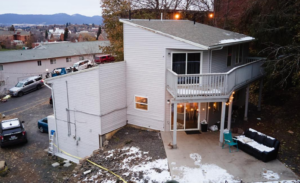