'We still believed that there is more information to be gathered,' said Moscow Police Chief James Fry

Police in Idaho continue to search for the suspect involved in the murder of four college students, updating the public ten days into the investigation.

Kaylee Goncalves, Madison Mogen, Xana Kernodle and Ethan Chapin were found dead in a rental home near the University of Idaho campus on Nov. 13. Goncalves, Mogen, and Kernodle lived in the house with two other roommates, who were uninjured and are not considered suspects in the stabbing. Chapin, who was in a relationship with Kernodle, was spending the night in the rental.

Moscow Chief of Police James Fry opened the Nov. 23 press conference by thanking the public for providing information to law enforcement that “helped investigators build a picture of the areas of interest” as well as understand the relationship the four victims had “with each other and our community.”

“We still believed that there is more information to be gathered,” said Fry. “We all want to understand why this happened – what drove someone to do this.”

Colonel Kendrick Wills of the Idaho State Police stressed that while the first hours after a crime are crucial, law enforcement continues to receive the results of forensic testing which maintains the investigation’s momentum.

“In law enforcement, we believe we owe this to the surviving families – to get this right,” Wills said. “And so we are not willing to sacrifice speed for quality.”

Wills said 103 pieces of evidence were collected from the crime scene, 4,000 photographs were taken, 150 interviews were conducted, and multiple 3-D scans of the residence were recorded.

Law enforcement has confirmed this was a targeted attack, but did not disclose whomever was the focus of the attack. Police said releasing the information could jeopardize the investigation.

“There is always a balance of what you’re willing to release,” said Captain Roger Lainer. “You are going to have to trust us on that.”

Lainer did dispel a number of rumors that have developed since the news of the attack broke.

A murder-suicide plot was ruled out. Police have also ruled out the private party who drove Goncalves and Mogen home from a downtown bar prior to the attack, as well as a man observed in a video taken of the two girls on Nov. 13, as suspects.

There was no evidence that any of the victims were bound and gagged. Police said some of the victims had defensive wounds and that they were most likely attacked in their sleep between 3 AM and 4 AM.

Lainer said investigators have been unable to corroborate claims that Goncalves had a stalker.

Police have not released a recording of the 911 call placed from the cell phone of one of the two uninjured roommates, who were both on the first floor of the three-story home. Two victims were found on the second floor of the house and two on the third floor. Multiple people who were inside the residence spoke to the 911 operator while reporting an unconscious person during the Nov. 13 call – which was placed just before 12 PM – but no identities have been released.

The weapon is believed to be a fixed-blade knife, as determined by the coroner after the victims’ autopsies.

Idaho Governor Brad Little had approved up to $1 million in expenses related to the investigation. Little, a University of Idaho alumnus, offered his sympathy to the victims’ families and encouraged students to make use of the resources offered to them if they were in need of help.

“The bright futures of these promising individuals were cut short, and the disturbing nature of this crime both outrages and deeply saddens our communities,” Little wrote in a statement on Nov. 21. “While we await more information from law enforcement, we can take solace in their dedication to justice and safety.”

In addition to the Idaho State Police, the Federal Bureau of Investigation is assisting the local police department with the investigation. 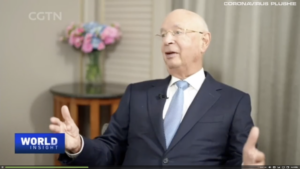 Klaus Schwab: China Is 'Role Model' for 'World Of Tomorrow'