John Pierce, the former attorney for Kyle Rittenhouse, has waived his entitlement to the teen’s $2 million bail fund.

The bail fund which Pierce helped to raise has been a point of major controversy, with the Rittenhouse family arguing that the money should only be going to them — and their new legal team publicly attacking the former for allegedly trying to keep it.

The California litigator filed an interpleader action in Texas federal district court this week. The filing was reviewed by Timcast and states that because Pierce was wired the money from Lin Wood’s Fightback Foundation, and he had driven to Kenosha to bail Rittenhouse out, a receipt was issued with his name.

However, the filing asserted that “Pierce does not claim and expressly disclaims any right, title, or interest the Remittance Receipt evidencing a right to receive the Bailed Funds.”

Wood, who no longer has any relationship with Pierce, has been fighting the family for the bail money to be returned to the Fightback Foundation — though it was raised specifically for Rittenhouse’s bail.

The filing adds that while Pierce is unsure of who is lawfully entitled to that money, as it was raised through the foundation, he “has not attempted to and does not intend to seek to claim the Bailed Funds evidenced by the Remittance Receipt.”

“I created the #FightBack Foundation that raised the bail money to set Kyle free, and I resigned from the board immediately upon taking Kyle’s case,” explained Pierce in a statement to Timcast. “Now there seems to be bickering between #FightBack and his current fundraising entity as to the disposition of those funds. I filed an interpleader action in Texas pursuant to federal venue requirements to make it clear that I am not the one determining what happens to the money, and I have no intent to make any claim to it.”

Pierce is the founder of the former powerhouse litigation firm, Pierce Bainbridge, but recently launched a more streamlined firm, John Pierce Law. He also recently launched the National Constitutional Law Union (NCLU) and has become a subject of intense media scrutiny and attacks as he is currently defending twenty-one of the January 6th Capitol Hill Protestors.

“This is an unprecedented time in history where regular, hard-working, Americans are being villainized, and in some cases, rounded up and jailed for protecting themselves or exercising their rights, simply because they haven’t bought into the ‘woke’ agenda. This manufactured controversy over the Rittenhouse bail money is nothing more than a distraction designed to discredit me, as I prepare the Capitol Hill protestors’ defense. This filing hopefully will put an end to the nonsense,” Pierce continued.

When asked about the Rittenhouse case specifically, Pierce asserted that “Kyle Rittenhouse is totally innocent, and I join tens of millions of Americans who support the right of self-defense and the Second Amendment in looking forward to his full acquittal by a jury of his peers.”

Rittenhouse was 17-years-old when he allegedly shot three rioters in Kenosha in August, 2020 — two of them fatally. His case has been extremely divisive with conservatives arguing that he was acting in self defense, while the left has portrayed him as a vigilante. He is facing two counts of homicide and one of attempted homicide, along with charges of reckless endangering and illegal possession of a dangerous weapon by a person under 18.

His trial is currently underway. 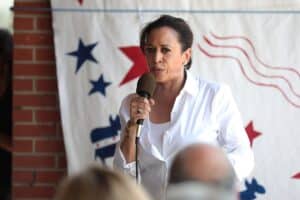