An ethics review board comprised of three retired judges has determined that South Dakota Governor Kristi Noem may have engaged in misconduct.

In a closed-door meeting Monday, the South Dakota Government Accountability Board said that Noem’s intervention in her daughter’s attempt to become a licensed appraiser may constitute a breach of ethics. The Associated Press reports the board also said that “appropriate action” could be taken against Noem in response to their findings:

However, the retired judges left it unclear how they will proceed. Lori Wilbur, the board chair, said the complaint was “partially dismissed and partially closed,” but added that the complaint could be reopened. She declined to discuss what would cause the board to reopen the complaint.

The retired judges also referred a complaint that Noem flew on state-owned airplanes to political events to the state attorney general’s office for further investigation. That puts the investigation under the oversight of the interim attorney general, Mark Vargo, who was appointed by Noem.

The governor, who is up for reelection this year, had her actions referred to the board by former South Dakota Attorney General Jason Ravnsborg. According to the Associated Press, which first reported on the governor’s intervention into her daughter’s application, the governor quickly called a meeting involving the head of the agency that reviewed the application and the state labor secretary. Noem’s daughter was also in attendance at that meeting. Four months later, Kassidy Peters, her daughter, successfully obtained the license she was seeking.

Ravnsborg and Noem have been trading political blows since the fall of 2021 when Ravnsborg struck and killed a South Dakota resident while traveling from an event. The former attorney general, who is also a member of the Republican party, was subsequently targeted by Noem who lobbied for his impeachment.

Ravnsborg maintains that the night he fatally struck and killed the man he believed he had hit a deer, but investigators determined that the victim’s head went through his windshield and that his glasses were found inside the Republican’s car. 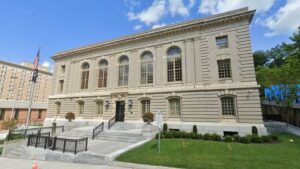 BREAKING: Explosive Detonated After Being Discovered in WV Courthouse