On Wednesday, Elon Musk visited Apple’s Headquarters in Cupertino, California following the tech billionaire’s criticism of the company regarding his acquisition of Twitter.

Apple CEO Tim Cook toured the Twitter owner around the location as the two discussed discrepancies Musk previously expressed on his platform earlier in the week, including the potential removal of the social media application from the company’s App Store. Musk shared a short video of what appears to be a pond at the headquarters.

“Thanks [Tim Cook] for taking me around Apple’s beautiful HQ,” wrote Musk.

“Good Conversation. Among other things, we resolved the misunderstanding about Twitter potentially being removed from the App Store,” Musk wrote in a follow up tweet shortly after. “Tim was clear that Apple never considered doing so.”

Good conversation. Among other things, we resolved the misunderstanding about Twitter potentially being removed from the App Store. Tim was clear that Apple never considered doing so.

Earlier this week, Musk became aware of alleged reports of Apple removing Twitter from their App Store regarding changes to the platform’s content moderation policy. Apple, along with myriad other corporations, pulled Twitter advertisements in a move that appeared to be in response to Musk’s intent to revamp the platform following his acquisition.

“Who else has Apple censored?” Musk asked in response to one user detailing the tech company’s insistence on a smaller company filtering search terms in order to remain on the App Store.

Who else has Apple censored? https://t.co/lZculFIkAX

“Secret suppression of free speech by Apple. Customers were never told,” Musk said in a follow up response to the user further detailing Apple’s moderation demands. “What the hell is going on here?”

Musk followed up Tuesday saying, “Apple and Google effectively control access to most of the Internet via their app stores.”

In a move towards transparency, Musk announced his intention to publish the platform’s files on speech suppression saying, “the public deserves to know what really happened.”

The Twitter Files on free speech suppression soon to be published on Twitter itself. The public deserves to know what really happened …

“They say that they’re going to continue to moderate and so … I count on them to do that,” Cook told CBS News in a November interview. “Because I don’t think that anybody really wants hate speech on their platform. So I’m counting on them to continue to do that.”

On Nov. 18, Musk clarified his stance on Twitter’s content moderation policy which appeared to move away from a seemingly arbitrary censorship standard to a more transparent policy of “deboosting” and “demonetizing” content deemed to be “negative/hateful.”

“New Twitter policy is freedom of speech, but not freedom of reach,” Musk said. “Negative/hate tweets will be max deboosted & demonetized, so no ads or other revenue to Twitter. You won’t find the tweet unless you specifically seek it out, which is no different from rest of Internet.” 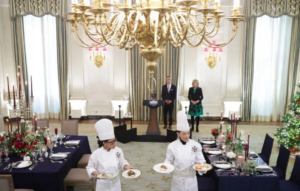