'I Will Be Digging In More Today' Musk Said

Musk, who secured his $44 billion acquisition of Twitter late Thursday, previously expressed interest in restoring access to accounts serving lifetime bans — including former President Donald Trump, who was banned shortly after the Capitol riot on Jan. 6 2021. Musk is also, however, planning on removing Twitter’s policy of imposing lifetime bans on accounts that violate the platform’s content moderation policies, according to Bloomberg.

“I do think that it was not correct to ban Donald Trump,” Musk previously said in an interview at the Financial Times Future of the Car summit. “I think that was a mistake.”

The tech billionaire reportedly plans to remain the CEO in the interim though is expected to appoint a replacement at a later time, Bloomberg reported.

Following Musk’s Thursday purchase of the platform, one user asked the tech billionaire to investigate reports of shadow banning and other seemingly malicious censorship tactics previously employed by the platform.

“I will be digging in more today,” Musk replied Friday morning.

Other accounts speculated to have their lifetime bans lifted include Alex Jones, James O’Keefe, and James Lindsay among others.

Upon acquiring the company, Twitter’s engineers could no longer make changes to the platform’s code as of noon Thursday. Tesla engineers were employed to assess and review Twitter’s code and report their findings to Musk, the outlet reported.

the bird is freed

In a Thursday statement, Musk explained his reasons for purchasing the platform, citing the importance of the “future of civilization to have a common digital town square.”

“There is currently a great danger that social media will splinter into far right wing and far left wing echo chambers that generate more hate and divide our society,” Musk continued in his statement. “I [bought Twitter] to help humanity, whom I love.”

Musk appeared to quash critics’ concerns, conceding the platform could not become a “free-for-all-hellscape” by ensuring the platform would adhere to the laws of the land.

The statement noted Musk’s apparent intention of creating a politically neutral experience for users: “Our platform must be warm and welcoming to all, where you can choose your desired experience according to your preferences … it is essential to show Twitter users advertising that is as relevant as possible to their needs.”

Previous reports claimed that Musk planned on firing 75 percent of current Twitter employees, bringing a roughly 7,500 member workforce down to about 2,000. However, the claim was recently disputed by those familiar with the matter, Bloomberg reported on Wednesday. 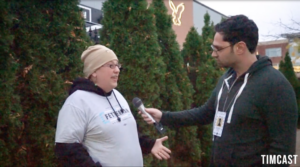