The Former Executives Were Reportedly Shuttled From The Building Shortly After

Sean Edgett was also reportedly pushed out along with the aforementioned executives as the former employees were shuttled from the building, according to the Washington Post.

The former executives have not removed their former positions in the company from their Twitter profiles nor have they publicly addressed their departure as of Thursday night.

Twitter's CEO Parag Agarawal, CFO Ned Segal, and chief content moderator Vijaya Gadde, who got Twitter to ban Donald Trump, got them to ban political ads, and censor the Hunter Biden story have all been FIRED

Gadde reportedly cried during a board meeting shortly after Musk’s initial bid to purchase Twitter in April, Politico reported at the time.

“Suspending the Twitter account of a major news organization for publishing a truthful story was obviously incredibly inappropriate,” said Musk referencing Gadde’s involvement in suspending the New York Post’s account in October 2020 following the outlet’s report on the contents of Hunter Biden’s laptop. Gadde was also reportedly involved in former President Trump’s ban from the platform in January 2020 following the Capitol riot.

Leading up to Musk’s purchase of the platform the tech billionaire updated his Twitter profile to read, “Chief Twit.” The Tesla CEO also shared a video of himself carrying a sink into Twitter’s headquarters with a cheeky caption, “Entering Twitter HQ – let that sink in!”

On Thursday morning Musk released a statement detailing his reasons for purchasing the platform.

“The reason I acquired Twitter is because it is important to the future of civilization to have a common digital town square, where a range of beliefs can be debated in a healthy manner, without resorting to violence,” said Musk. “There is currently a great danger that social media will splinter unto far right wing and far left wing echo chambers that generate more hate and divide our society.”

“In the relentless pursuit of clicks, much of traditional media has fueled and catered to those polarized extremes, as they believe that is what brings in the money, but, in doing so, the opportunity for dialogue is lost,” Musk continued noting the platform’s sensationalization of viral content.

That is why I bought Twitter. … I didn’t do it to help make more money. I did try to help humanity, whom I love. And I do so with humility, recognizing that failure in pursuing this goal, despite our best efforts, is a very real possibility. Twitter obviously cannot become a free-for-all-hellscape, where anything can be said with no consequences! In addition to adhering to the laws of the land, our platform must be warm and welcoming to all, … I also very much believe that advertising, when done right, can delight, entertain and inform you … it is essential to show Twitter users advertising that is as relevant as possible to their needs. Low relevance ads are spam, but highly relevant ads are actual content! 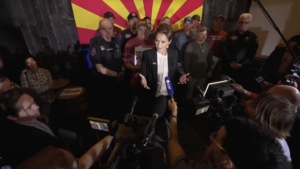