Kari Lake pushed back on her opponent’s insinuation that her campaign was responsible for a burglary at Katie Hobbs’ office earlier this week.

On Wednesday, a CNN reporter asked Lake to comment on a Wednesday statement released by Hobbs appearing to suggest Lake and her “allies” were responsible for the Tuesday burglary at her Phoenix, Arizona office because of their “concerted campaign of lies and intimidation.”

“That is absolutely absurd. Are you guys buying that?” Lake responded.

“Are you really buying that? ‘Cause this sounds like a Jussie Smollett part two,” Lake said, referencing the actor’s infamous 2019 hate-crime claim.

“So you’re gonna drag the American people through something like this?” Lake said. “You want to distract the people with an old story — and I can’t believe [Hobbs] would blame my amazing people — blame me — for something like that.”

She continued: “You drag the American people through so many BS stories like Jussie Smollett. You’re letting [a woman] who’s been running a terrible campaign direct you to a story like this? You know that she’s running a bad campaign. She’s being attacked by her own party, and she’s desperate.”

Lake concluded by suggesting her opponent was running “the worst [campaign] in the history of campaigns.”

“Earlier this week, a break-in occurred at our campaign headquarters,” read Hobbs’ statement. “We continue to cooperate with law enforcement as they investigate, and we are thankful to the men and woman of the Phoenix Police Department for their work to keep us safe.”

Statement from our campaign on tonight's news: pic.twitter.com/OLqPMa5pYt

“Secretary Hobbs and her staff have faced hundreds of death threats and threats of violence over the course of this campaign. Throughout this race, we have been clear that the safety of our staff and of the Secretary is our number one priority.”

The statement continued to take aim at Lake by appearing to suggest the Republican candidate was responsible for the burglary:

Let’s be clear: for nearly two years Kari Lake and her allies have been spreading dangerous misinformation and inciting threats against anyone they see fit. The threats against Arizonans attempting to exercise their constitutional rights and their attacks on elected officials are the direct result of a concerted campaign of lies and intimidation. It won’t work. Katie is running for governor to ensure the safety and security of every Arizona family. She will win this race.

On Thursday, Phoenix police announced an arrest had been made in connection with the Tuesday burglary, CNN reported. 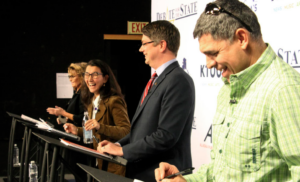