Investors in the NFT project Jungle Freaks are losing thousands of dollars in investments after actor Elijah Wood caved to a woke mob, publicly sold off his NFTs and donated the proceeds to Black Lives Matter and the NAACP Legal Defense and Educational Fund.

Trosley and his son’s NFT efforts were considered top blue chip investments in the NFT world — until the mob came for them over cartoons the artist drew in the 1970s.

It was a top blue chip project that suddenly tanked over this. A few thousand people’s investments instantly wrecked.

On October 27, Wood endorsed the project and by Sunday he was selling them all off and groveling publicly for forgiveness.

“After previously purchasing some NFTs, as well as being gifted one, I was made aware of some of the artist’s prior disturbing cartoons. Upon learning of this, I immediately sold the NFTs as I wholly denounce any form of racism. I have donated the funds from the sale of the NFTs to LDF and Black Lives Matter,” Wood tweeted.

The public statement and condemnation prompted a selloff — costing investors thousands of dollars.

The father-son team also issued a sharp statement condemning the prior work and denying that it is racist, in both a written statement and a video.

The son wrote in a statement posted on Twitter, “the cartoons my father drew are horrible. These images were brought to light recently and there hasn’t been a better time to accept responsibility, learn from it, and extend our sincerest apologies. I want to make it clear that The Jungle Freaks do not support or condone racism in any way.”

Everyone, this statement was made to our discord last night but we wanted to publish it here. pic.twitter.com/UuVYzXvBGn

“This was the culture Larry Flint & Hustler pushed, it was incorrect then and it’s incorrect now. My father should not have participated in this,” the son wrote. “My father has expressed to me how ashamed he is for the cartoons many have seen. This project and NFT space as a whole has allowed my father an opportunity to redeem himself. The community, from day one, has been about inclusivity.”

In the video, they explain that Flint hates former President Donald Trump — as “proof” that he is not racist and claim that the drawings he did nearly 50 years ago were meant to bring attention to problems and injustices in society.

The fact that people are still buying @JungleFreaksNFT by George Trosley says a lot about the NFT space. Speak up leaders in the space #JUNGLEFREAKS racism. pic.twitter.com/P72kePbs5S

One of the more controversial cartoons features a handcuffed black man at the scene of murder where the witnesses are handwringing about the police hurting his wrists. Another features someone using the KKK as car theft prevention.

According to the Decrypt report, the Trosleys are planning to hold a live-video AMA on Friday. They have said that they will be taking questions from both the public and investors. 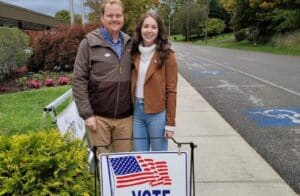