A Virginia Democrat who was running for reelection was busted driving on a suspended license the night before polls opened — while his girlfriend stole his opponent’s campaign signs.

It has now been projected that the candidate, Chris Hurst, has lost his bid for re-election to Republican Jason Ballard for the Virginia House of Delegates District 12.

Hurst was pulled over by the Radford City Police late Monday evening after officers saw his girlfriend Emily Frentress removing campaign signs from outside a polling place.

I just voted early and you can too! Early voting ends TODAY! Go to https://t.co/9GTsBHQUgk to learn more about where you can cast your vote before this Tuesday. pic.twitter.com/ViQ2dsHkwT

The candidate was given a “driving while suspended notification” and his girlfriend was ordered to return the signs. In Virginia, it is illegal to remove or vandalize campaign signs, but she was not charged.

The Washington Free Beacon reports, “while Radford City sheriff Mark Armentrout did not reveal why Hurst’s license was suspended, police in January 2020 pulled over the Democrat on suspicion of drunk driving. Hurst went on to take a preliminary breath test, which showed a blood alcohol concentration of .085 percent—just above the legal limit of .08. Under Virginia law, however, state legislators are immune from arrest unless they commit ‘treason, a felony, or a breach of peace,’ meaning that Hurst was let off with a warning.”

“I am deeply disappointed that Chris Hurst has decided to end his campaign in such a reckless way. His latest misstep is yet another reason why he doesn’t deserve another term as Delegate. I, on the other hand, will remain laser focused on the issues that matter most to the people of the 12th District. I will always strive to set a good and positive example for my children and the fine people of the New River Valley,” Ballard said.

Hurst did not show up for his campaign’s watch party on Tuesday evening until close to 11 p.m. When he arrived, he addressed the incident for the first time and claimed that it was a “prank.”

“This has been a real drag out race. It’s been very competitive and to some degree it’s been sometimes nasty. Election Eve, you’ve run a really hard race, a very long campaign and you just do a prank to be a goof and it happens to be done by somebody who is very apologetic for what they’ve done,” Hurst told WDBJ7.

As far as his suspended license, Hurst claimed that it was an insurance issue.

“The 93 Jeep didn’t have current insurance for it and I have not received a notice from DMV, so was not something I was aware of until the officers informed me of that,” he said. 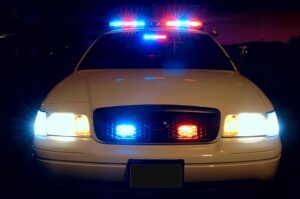