The DOJ is currently investigating Jan. 6 and alleged efforts to overturn the 2020 election

President Donald Trump announced that the Federal Bureau of Investigation has raided his private estate in Florida.

Mar-a-Lago is “currently under siege, raided, and occupied by a large group of FBI agents,” the former president said in a statement around 7 P.M. on Aug. 8.

“Nothing like this has ever happened to a President of the United States before,” Trump said in a statement. “After working and cooperating with the relevant Government agencies, this unannounced raid on my home was not necessary or appropriate.”

The purpose of the search was not immediately clear. Trump noted that agents executing a search warrant “even broke into [his] safe.”

The Justice Department “has accelerated its investigation into the Jan. 6 attack on the Capitol and further examined Trump’s actions to overturn the 2020 election results to remain in power,” according to The Hill.

In February, the National Archives and Records Administration formally denied searching Mar-a-Lago for documents from Trump’s time in the White House.

“Throughout the course of the last year, NARA obtained the cooperation of Trump representatives to locate Presidential records that had not been transferred to the National Archives at the end of the Trump administration,” the National Archives wrote in a statement, per Newsweek. “When a representative informed NARA in December 2021 that they located some records, NARA arranged for them to be securely transported to Washington. NARA officials did not visit or ‘raid’ the Mar-a-Lago property.”

Trump is currently in New Jersey near the Trump National Golf Club Bedminster.

“I stood up for America’s bureaucratic corruption, I restored power to the people, and truly delivered for our Country, like we have never seen before,” Trump wrote. “The establishment hated it.”

“Now, as they watch my endorsed candidates win big victories, and see my dominance in all polls, they are trying to stop me, and the Republican Party, once more.”

He called for the ”witch hunt” to be “exposed and stopped.” 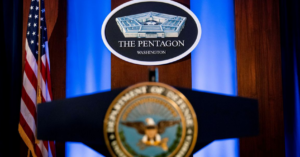