This is the second time that DeSantis has beat Trump in the conference’s annual straw poll.

In this year’s poll, 71 percent said that they supported a DeSantis presidential run, and 67 percent wanted Trump to run again. Attendees were allowed to choose more than one candidate though, according to a report from Mediaite.

Support for both candidates does appear to have dipped, however, when looking at last year’s poll numbers. The Florida governor previously received 74 percent support, to Trump’s 71 percent.

“Trailing a distance behind the two Republicans were names like Sen. Ted Cruz (R-TX), who received 29 percent support and former Trump White House Press Secretary Sarah Huckabee Sanders, who got 18 percent. She is currently running for governor in Arkansas. Ben Carson also appeared on the list, receiving 24 percent backing,” the Mediaite report states.

In May, as Timcast previously reported, DeSantis bested Trump as the top pick for 2024 in a Wisconsin Republican Party straw poll.

DeSantis also recently caught up to Trump as the front-runners on PredictIt for odds of winning the 2024 election.

Both DeSantis and Trump’s shares were trading at 28 cents, while President Joe Biden trailed behind at 23 cents. Trump has recently seen a bump in the odds and is now at 29 cents and DeSantis at 27 cents.

Neither of the two have officially announced that they are running in 2024, though Trump has repeatedly heavily implied that he will be. 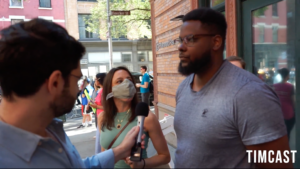