The former police officer who was convicted of killing George Floyd is being moved out of Minnesota.

Derek Chauvin had been held in solitary confinement at a maximum-security state prison. He was transported to the Federal Correctional Institution in Tucson, a medium-security prison in Arizona, where he will be held under less restrictive conditions.

Chauvin had been in solitary confinement “largely for his own protection” according to a letter written by his attorney, Eric Nelson, in June. His client’s safety may have been jeopardized if he were housed with the general population with criminals he had investigated as an officer.

“It’s dangerous to be an officer in any prison,” said former U.S. Attorney Tom Heffelfinger, per CP24. “It’s even more dangerous in state prison because of the nature of the inmate population. There are gangs, for example. And police officers just don’t do well there. Those risks are reduced in a federal prison.”

In April of 2021, Chauvin was convicted of second-degree murder, third-degree murder and manslaughter in the death of George Floyd, which occurred while officers attempted to arrest him in 2020. Videos of the incident sparked national anti-police sentiment as well as rallied supporters for Black Lives Matter and led to a summer of riots in major American cities. Chauvin was sentenced to 22.5 years in prison.

In May of 2020, Chauvin pleaded guilty to a federal civil rights violation, for which he was sentenced to 21 years in prison, to run concurrent to his state sentence.

As part of the plea agreement, Chauvin must serve a minimum of 20 years in prison and up to a maximum of 25. Chauvin’s one request was that he be allowed to serve his sentence in federal prison even if it meant serving a longer sentence.

Greg and Travis McMichael made a similar request during their sentencing in early August. The father and son were convicted of state murder charges and federal hate crime charges stemming from the death of Ahmaud Arbery in Georgia. Both men, who previously worked in law enforcement, cited serious concerns for their safety if they were housed in the Georgia prison system.

While sentencing Chauvin, U.S. District Judge Paul Magnuson suggested he be housed near family between Minnesota and Iowa but judicial suggestions are not binding for federal officials.

The Tuscon facility where he will be held houses just over 260 inmates, both men and women. The facility is part of a complex that included a high-security penitentiary and a minimum-security satellite camp, per CBS News. 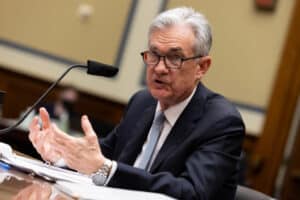