The father and son who were convicted for shooting Ahmaud Arbery in a Georgia neighborhood were sentenced to life in prison for committing a federal hate crime.

Arbery was reportedly jogging in Brunswick, Georgia when Greg and Travis McMichael began pursuing him in a truck.

Their neighbor, William “Roddie” Bryan, followed the men in his own truck and filmed Travis McMichaels shooting Arbery amid a physical altercation. The McMichaels told investigators after the Feb. 23, 2020 incident that they thought Arbery was a burglar.

All three men were convicted for their involvement in Arbery’s death brought by the state in November of 2021 and on hate crime charges in February.

While appearing in U.S. District Court in Brunswick on Aug. 8, Travis, 36, received an additional life in prison sentence plus 10 years. The younger McMichael had requested, through his lawyer, to remain in the federal government’s physical custody because he fears he will be murdered if he is moved to the Georgia state prison system.

“His concern is that he will promptly be killed upon delivery to the state prison system for service of that sentence: He has received numerous threats of death that are credible in light of all circumstances, and the government has a pending investigation into the Georgia DOC’s ability to keep inmates safe in a system where murder rates have tripled,” said a memo filed with the court by McMichael’s attorney, Amy Lee Copeland.

Copeland asked for a more lenient sentence, noting McMichales serviced in the Coast Gaurd and that he had no prior criminal history.

CNN reports that Arbery’s family objects to the men convicted of his death “serving time in federal instead of state prison.”

“You killed him because he was a Black man and you hate Black people,” he said. “You deserve no mercy.”

Greg McMichael, whose sentencing hearing began at 3 P.M. after his son’s appreance, has also asked to be allowed to serve his sentence in federal prison.

His attorney, A.J. Balbo, said his client’s welfare would be in danger in state prison because of the highly publicized nature of the case and because of the racial overtones of the charges.

In a memo filed with the court, the lawyer noted McMichael has suffered from a stroke, heart disease, and depression.

“He is also a former law enforcement officer who has been convicted of a hate crime resulting in the death of a young African American man, all of which has been reported worldwide,” the motion states. “Those factors implicate personal safety concerns at whatever penal facility he is assigned.

“In other words, Greg McMichael will most assuredly be a target for violence because of his prior profession and his offense,” Balbo wrote.

Before retiring in 2019, McMichael spent 20 years as an investigator for the Brunswick Judicial Circuit District Attorney’s Office and 7 years as a Glynn County police officer.

“Balbo further noted a prevailing perception of unchecked violence within Georgia’s prisons, an issue that in 2021 sparked a U.S. Justice Department investigation,” per The Brunswick News.

Greg McMichaels told the members of Arbery’s family who attended the sentencing that their loss was “beyond descriptions.”

“I’m sure my words mean very little to you but I want to assure you I never wanted any of this to happen,” he said. “There was no malice in my heart or my son’s heart that day.”

The older McMichael also received an additional life sentence. He and his son had already been sentenced to life in prison without parole.

“A young man is dead. Ahmaud Arbery will be forever 25. And what happened a jury found happened because he’s Black,” U.S. District Court Judge Lisa Godbey Wood, per WSOC-TV.

Wood declined to keep Greg McMichael in federal custody and noted that, while she did not have the authority to order the federal government to release Travis McDaniel, she was not inclined to keep him in federal prison either. 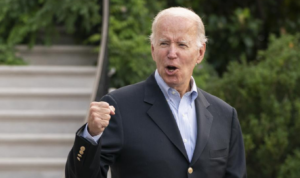 Biden Travels to Delaware After Testing Negative for COVID-19