Olick is said to be pursuing a new, unspecified opportunity and will leave the department by the end of the month.

In an email to DHS staffers, Mayorkas said, “We are grateful to Karen for her service during the critical first nine months of the new Administration.”

Olick led the ballot initiative practice for a Democratic strategic communications firm before joining the federal government. Additionally, she worked on political campaigns for Joe Biden and former U.S. Senator Mary Landrieu. She previously served as an aide to Senator Barbara Boxer for over ten years including serving as chief of staff until 2007. On January 20, 2021, Olick was appointed to the chief of staff position with DHS.

In a message to DHS, she wrote, “Though too often underappreciated by our fellow citizens, I am continually struck by how many millions of Americans sleep in safety every night because so many at DHS do not sleep.”

According to Politico, “Employees and senior officials at DHS have also been working non-stop on other crises that their department is taking a lead on including responding to the impacts of Hurricane Ida and helping vet tens of thousands of Afghan refugees who the U.S. evacuated from Kabul in August.”

Earlier this year, Mayorkas was under fire for his handling of the southern border. South Carolina Senator Lindsey Graham called on the DHS secretary to change his policies or resign.

In a statement, Graham said the Biden administration has “lost control of the border” and that Mayorkas “doesn’t have either the will or capability to fix the problem.”

During his testimony to a House committee, Mayorkas “admitted his department released illegal immigrants into communities without testing them for the coronavirus. Local officials say up to 25% of the migrants are COVID-positive,” per The Washington Times.

The chief of staff position will be temporarily filled by Jennifer Higgins, the associate director of Refugee, Asylum, and International Operations at U.S. Citizenship and Immigration Services. She has worked for the federal government for over 20 years. 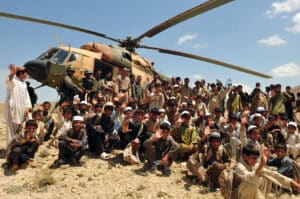 US to Send $64 Million in ‘Humanitarian Aid’ to Afghanistan