Demonstrators Gather at the Supreme Court Following the End of Roe v. Wade

'I've prayed for this my whole life,’ said Congresswoman Marjorie Taylor Greene, who was among the assembled crowd

Swarms of abortion advocates and adversaries gathered outside the Supreme Court following the repeal of Roe v. Wade.

The 1973 decision granted the federal right to abortion and nullified bans on abortions levied by individual states.

An estimated 100 people were initially present at the court when the court released its landmark decision on June 24. Just after 12 P.M., a reporter for NBC Washington speculated that the crowd had swelled to more than 2,000 people.

Washington D.C. fully activated its police department in preparation for potentially violent clashes between those gathered in the city.

On way to the court pic.twitter.com/XrE9ExAzhm

Business Insider reported that “a heavy law enforcement presence gathered outside the Supreme Court building on Friday ahead of the court releasing its decision in Dobbs vs. Jackson Women’s Health, which invalidated the federal protections to abortion access in the nearly 50-year-old Roe decision.”

Following the leak of a draft of the court’s decision in May, an 8-foot fence was erected around the building. It is currently in place, keeping demonstrators from an area that is typically accessible to the public.

“Leave abortion on demand,” the crowd chanted just after 12:15 P.M. “This decision must not stand!”

Others have called for continuous civil action until the court undoes its reversal of abortion protection.

Hey I'm at the top of the Frederick Douglass bridge in Washington DC right now & want to know why YOU aren't in the streets nonviolently shutting down the gov day after day after day till Congress protects abortion rights? Rise Up my Friends! pic.twitter.com/sDuqmpi8fm

Congresswoman Marjorie Taylor Greene was photographed among the crowd at the court. She told reporters on the scene that the decision, authored by Justice Samuel Alito, is a “blessing” and an “answered prayer.”

“I’ve prayed for this my whole life,” Greene said, per NBC News.

The Metropolitan Police Department and DC Homeland Security released a joint statement with the Emergency Management Agency saying they are “closely monitoring the situation, and are actively coordinating and sharing information with [their] federal partners.”

“Mayor Bowser and our public safety agencies are aware of the Supreme Court ruling that was released today,” the departments stated. “Mayor Bowser has been briefed and is committed to providing the necessary resources and support to keep our community safe.”

The U.S. Marshall service has been providing 24-hour protection to the Supreme Court justices and their families since the May 2 leak of the Dobbs decision. 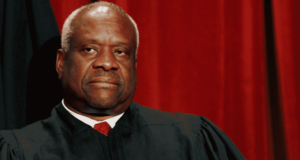