The Supreme Court issed a historic 6-3 decision in the Dobbs v. Jackson Women’s Health Organization ruling, overturning Roe v. Wade, de-federalizing the issue of abortion and returning it to the states.

Justice Samuel Alito wrote the Court’s opinion and held that the Constitution does not confer a right to abortion.

But in a concurring opinion, Justice Clarence Thomas addressed part of the legal underpinning of Roe v. Wade and how it may affect similar cases that have come before the Court: specifically cases on gay marriage.

Justice Thomas stated that the resolution of this case is straightforward because the Due Process Clause “does not secure any substantive rights” and made clear that this decision does not impact the Court’s past rulings on Griswold v. Connecticut, Lawrence v. Texas, or Obergefell v. Hodges — three cases directly related to gay marriage.

“For that reason, in future cases, we should reconsider all of this Court’s substantive due process precedents, including Griswold, Lawrence, and Obergefell,” meaning those rulings are not guaranteed to escape future judicial scrutiny. Fresh legal challenges to those precedents could result in the same outcome as Roe v. Wade — with those precedents being overturned.

As written in Justice Thomas’s opinion, the Court on more than one occasion has simply created constitutional rights out of thin air, with Roe v. Wade being one of the most egregious examples.

Justice Thomas rebuked the “legal fiction” of substantive due process, which he wrote “exalts judges at the expense of the People from whom they derive their authority.” He stated that the Due Process Clause only speaks to process and because of that, the Court has “struggled to define what substantantive rights it protects.” Moreover, he asserted, the Court’s approach for identifying fundamental rights constitutes policymaking, rather than legal analysis.

“The harm caused by this Court’s forays into substantive due process remains immeasurable,” he wrote.

But, Jim Obergefell, the lead plaintiff in the landmark same-sex marriage case, excoriated Justice Thomas in a statement shortly after the ruling.

“Clarence Thomas is a Supreme Court justice appointed by humans, he is not the Supreme Deity,” he said. “The millions of loving couples who have the right to marriage equality to form their own families do not need Clarence Thomas imposing his individual twisted morality upon them. If you want to see an error in judgment, Clarence Thomas, look in the mirror.”

In his opinion, Justice Thomas called the gay marriage precedents established in Griswald, Lawrence, and Obergefell “demonstrably erroneous” and argued that in future cases, the Court should “follow the text of the Constitution, which sets forth certain substantive rights that cannot be taken away, and adds, beyond that, a right to due process when life, liberty, or property is to be taken away.”

Jerry Nadler (D-NY), Chairman of the House Judiciary Committee, issued a blistering statement in a speech on the House floor, saying, “Justice Thomas has indicated that this is merely the beginning of a radical right-wing effort to throw back other rights, including the right to contraception, the right to marry whomever we choose, and the fundamental right to privacy.” 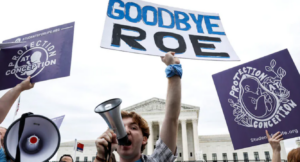 Abortion Regulations That Are Now in Effect Following Repeal of Roe V. Wade