Operatives of the Democrat Party have created a “sprawling network” of fake local news websites in swing states to disguise partisan messaging as legitimate news, according to a new report from Axios.

At least 51 locally branded news sites have been sprung up since last year, using names including the Milwaukee Metro Times, the Mecklenburg Herald and the Tri-City Record, Axios reports.

At the time of the investigation, the masthead of the purported news sites showed involvement with The American Independent, a progressive organization that has changed names multiple times.

The company was originally called Blue Nation Review. Then, it was sold to Media Matters For America founder David Brock in 2015. Brock fired most of the staff, afterwards hiring a former Clinton staffer named Peter Daou to head and write for the organization, which he re-named True Blue Media, LLC. Two months before the 2016 election, the company rebranded as Shareblue and in 2019 — again — rebranded as The American Independent “in preparation for 2020 coverage.”

It’s website shows that part of its funding comes from The American Bridge 21st Century Foundation, a Democrat super-PAC.

For each of the fake news sites, the “About Us” page says they are run by Local Report, Inc., a company created in Florida in August 2021. (The organization does not currently have an active website).

However, after Axios published the exposé showing the websites as extensions of the Democrat political machine, all of the named websites have deleted their “About Us” pages.

“It’s an increasingly common tactic among political outfits looking to give their team a steady stream of positive content they can then use to boost their own electoral communications,” Axios says.

In September 2022, Newsguard — which rates news and information sites based on factors like repeatedly publishing false information, presenting information responsibly, and correcting or clarifying errors — called a network that appeared connected to The American Independent “the latest example of mass-produced, partisan news sites masquerading as local news, known as ‘pink slime’ journalism.”

Newsguard also mentions that similar operations that ran roughly 1,200 websites were setup by Republicans ahead of the 2020 elections.

Axios obtained a statement from Local Report, stating, “Our portfolio includes a number of digital news sites across the country that are focused on sharing local news and providing readers with fact-based coverage of their communities. We are proud to collaborate with partners like the American Independent that are also committed to bringing the public reliable information that they can trust.”

The e-mail, according to Axios, came from a generic “[email protected]“ account and did not identify the name of the sender or anyone affiliated with the company. 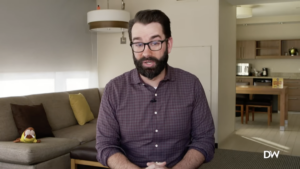 'Kiss My A—': Matt Walsh Refuses To Bend Knee To Activists