The segment began with host Michael Steele referencing an article from the Daily Beast on comments from RT’s editor-in-chief Margarita Simonyan.

Simonyan had reportedly made the case for Putin sitting down with Carlson during a recent interview, saying “You showed the clip of wonderful Tucker Carlson, who—by the way—is dreaming of interviewing Vladimir Putin, simply dreaming about it! It’s not within my purview, but if anyone could make it happen, it would be amazing. He is the most popular host in the United States and perhaps the only one who is reasonable, has the biggest audience, who understands everything the way it should be understood.”

Steele said that that he found it “disturbing” that “it’s being reported that Fox News and Tucker Carlson are working to secure an interview with Vladimir Putin. Kremlin representatives actually think this would be a good thing for Putin.”

Steele asked the Rhode Island congressman if he found that “frustrating.”

“This is the same man who said, why aren’t we supporting Russia in this conflict? Russia and Ukraine are both foreign countries,” Cicilline continued. “The absurdity of not recognizing that one of them is a democracy where people have elected to turn to the west and don’t want to be part of Russia and the other is a thuggish dictator.”

“The idea that he thinks they’re the same is preposterous,” he added. “This is the same person who went to Hungary to interview Victor Orban, and I guess for his encore, he’ll have [Rodrigo] Duterte from the Philippines. It’s shocking, it’s embarrassing, he ought to be ashamed of himself.”

Of course, journalists have always tried to interview foreign leaders and even those we are in conflict with. Just recently, CNN’s Clarissa Ward interviewed Taliban fighters.

In October, the Washington Post published a sit-down interview with an ISIS militant.

Mediaite notes, “While Davis’s report shows how much of Carlson’s talking points are politically simpatico to that of the Kremlin and Putin, it does not make clear that there are current efforts for Carlson to try and interview Putin. Carlson DID effort to interview Putin last year and which was caught by standard NSA surveillance, which he used as evidence he was being spied upon. The NSA found no evidence that that was the case.” 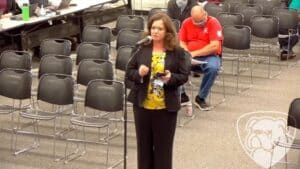