It’s Energy, Stupid: The Return of Malaise at Home and Abroad

The Biden administration’s ignorance of recent U.S. energy history may condemn America to repeat the economic and political disasters of the 1970s.

On January 20, 2021, President Joe Biden signed an executive order limiting the development of fossil fuels, including the cancellation of the Keystone XL pipeline. This order revoked a March 2019 permit to build the pipeline between the United States and Canada, stating that the pipeline would “not serve the U.S. national interest,” and that “the significance of the proposed pipeline for our energy security and economy is limited.”

In addition, the Biden administration implemented a variety of regulations, including limits on international financing for fossil fuels. A year later, a massive spike in gas prices developed — increasing by 50 percent in 2021 — and has failed to abate.

In facts, it’s not just gas prices that are rising. America’s consumer inflation rate hit 7 percent, with energy costs overall rising 29 percent and the price of used cars and trucks going up 37 percent. Malaise, a term most associated with the Jimmy Carter administration, has been making a comeback as of late in commentaries on today’s state of affairs. The administration appears to be repeating the mistakes of five decades ago.

If the United States loses the ability to be energy self-sufficient, the United States will make itself subservient to foreign powers. While energy policy has often been overlooked in the scheme of measuring a successful presidency, it is a key component to managing both the economy and foreign policy of the United States. The Biden administration’s ignorance of recent U.S. energy history may certainly condemn America to repeat the economic and political disasters of the 1970s.

The 1970s wrought a vast array of crises facing the United States at home and abroad. The 2021 Afghanistan withdrawal reminded Americans of the April 30, 1975 Fall of Saigon. In 1973, OAPEC (Organization of Arab Petroleum Exporting Countries) — a coalition of oil-producing countries in the Middle East — announced an oil embargo of the countries that supported Israel in the Yom Kippur War. Afterward, OPEC (Organization of the Petroleum Exporting Countries) flexed their newfound economic power by continuing to raise the price of oil.

The end result of the 1973-74 oil crisis was a global recession and a pervasive long-term impact on energy consumption in the United States. Among the measures adopted was a national 55-mph speed limit which became resoundingly unpopular. The collapse of the Bretton Woods system (a global monetary management system utilizing a gold standard spanning 1944 to the early 1970s) and the Nixon administration’s use of price controls to curb inflation at the start of the decade were two factors negatively affecting the economy. Additionally, the oil crisis exacerbated “stagflation” that would remain a problem throughout the 1970s and early 1980s. Campaigns led by both Democratic and Republican administrations — such as President Ford’s Whip Inflation Now — did little to stem the tide.

In 1977, Jimmy Carter’s administration embraced an approach of limiting domestic oil production while promoting alternative energy sources. President Carter claimed in an April 18, 1977 address that: “World oil production can probably keep going up for another six or eight years. But some time in the 1980s it can’t go up much more. Demand will overtake production. We have no choice about that”.

Carter’s peak oil-influenced policies failed to inure the U.S. from future energy shortages. The fall of a pro-U.S. monarchy and ascent of an anti-U.S. theocracy in Iran triggered a second oil crisis lasting between 1979 through 1980. Iran, a prominent oil producer, was able to impact oil prices just as Carter’s administration. When the troubles continued to mount, instead of focusing on the origins of the crises — the countries of OPEC, the theocracy in Iran, or the U.S. government’s energy, fiscal and monetary policies — Jimmy Carter went ahead and blamed the American people. Carter’s July 15, 1979 address, in which he used the phrase “crisis of confidence” to describe Americans’ lack of faith in the government, became known as the “national malaise” speech.

One of Merriam-Webster Dictionary’s current definitions of malaise is “a vague sense of mental or moral ill-being,” with an “Essential Meaning” described as “a problem or condition that harms or weakens a group, society, etc.” It would appear that the malaise, then and now, has been and is the set of policies that has weakened American energy production.

The inflation and energy woes of the 1970s subsided over time with the ascent of an administration with a different set of policy priorities. It is notable that the oil glut — credited with saving the U.S. economy from stagflation — was encouraged by the Reagan administration’s pro-oil exploration policies. In January 1981, President Reagan removed controls from oil and natural gas development. While the U.S. never attained energy independence during his terms in office, his policies set the U.S. up for a period of prosperity towards the end of the 20th century. Every President since Ronald Reagan has had a goal of energy independence or, at the very least, reducing dependence on foreign oil.

It took almost four decades to make energy independence a reality. The previous administration — for all the resistance it encountered — set policies to make the United States less dependent on foreign oil. The Institute for Energy Research proclaimed that 2019 was the first year in which the U.S. attained energy independence since 1957. In 2020 the U.S. Energy Information Administration determined that the U.S. was a net annual petroleum exporter for the first time since at least 1949. While it remained a crude oil importer in 2020, petroleum imports in that year were the lowest since 1991.

The same agency found that in the first half of 2021, the U.S. exported slightly more petroleum than it imported. The chart on the EIA’s Petroleum Supply Monthly data illustrates the trend towards petroleum exports in the most recent past administration between 2017-2021, as well as signs of a possible trend back towards oil imports. On Jan. 4, 2022, the EIA released findings that demand for crude oil outpaced supply throughout 2021. The high demand sparked an increase from $50 per barrel in the start of the year to a high of $86 per barrel in late October. While the report attributes increased demand to a variety of factors including the loosening of pandemic restrictions, one must wonder if Biden’s extensive regulations inhibited the supply necessary to prevent a price surge. The agency also stated that the global petroleum inventories experienced the largest withdrawal since 2007.

While the above data illustrates the success of the most recent Republican administration in increasing oil production, Republican governments aren’t the only ones that have sought to produce more oil and gas. Even the Obama administration approved of domestic energy production, primarily natural gas but also domestic oil. Biden’s stated approach is a radical departure from previous recent administrations in both parties.

Yet Biden’s cancellation of the Keystone pipeline may be a consequential decision fueling the economic insecurity in the U.S. and global instability abroad. Everything from inflation to the mounting crisis with Russia over Ukraine can be tied back to the 46th president’s decision to limit domestic energy production and kill Keystone XL. In November of last year, prices skyrocketed to the extent that President Biden released 50 million barrels of oil from the Strategic Petroleum Preserve. Senator Joe Manchin (D-West Virginia) criticized Biden’s policies and requested the president revive the U.S.-to-Canada pipeline. In addition, some estimates suggest that the pipeline cancellation itself cost 11,000 jobs. Hundreds of thousands more jobs are estimated to be lost as the result of Biden’s overall suspension of oil and gas drilling on federal lands.

Just as energy dependency placed power in the hands of America’s adversaries in the 1970s, some countries have now become dependent on Russian natural gas. The Nord Stream 2 pipeline owned by a Russian parent company that supplies natural gas to Western Europe from Russia was opposed by the previous administration. While the Biden administration initially opposed it, sanctions were waived in May of last year. Combined with the administration’s handling of the withdrawal from Afghanistan, the political leverage arising from the energy situation has empowered Russia to be bellicose in their intentions towards Ukraine. Considering that the tensions have reportedly been escalating to the point of a showdown at the United Nations Security Council, this crisis will likely not go quietly into the night.

Believe it or not, the situation could easily have been worse had the Biden administration accomplished its full policy agenda. David Blackmon, in an article published in Forbes, indicates that Senators Manchin and Sinema saved the U.S. — and President Biden — from an energy security disaster. Blackmon contends that by stymieing the Build Back Better bill, which would further the framework of the Green New Deal, they prevented the United States from going “on the same failed path that many European nations have trod during the first 21 years of this century.” While the failure of Build Back Better may have barely blunted the momentum towards an energy crisis, the administration’s overall long-term vision is one not dissimilar to that of Europe’s. Western Europe has been reduced to dependence upon Russia. Will the U.S. ultimately follow suit? 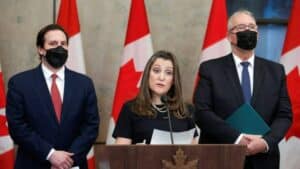 Canada Enlists the Help of Banks To Restrict Finances of Protestors