The mandate was introduced in December under former Prime Minister Andrej Babis.

The new Czech government has repealed a COVID-19 vaccination mandate for professionals and those over the age of 60.

Prime Minister Petr Fiala leads a center-right government that was elected in December. He said at a news conference this week that there was no reason to make vaccines compulsory.

“We’ve agreed that vaccination against COVID-19 won’t be mandatory,” said Fiala. He said approximately 90% of the country’s population would have been affected by the mandate, which would have been effective as of March 1.

“This does not change our stance on vaccination. It is still undoubtedly the best way to fight COVID-19 … however, we do not want to deepen fissures in society,” said the prime minister.

The mandate was introduced in December under Prime Minister Andrej Babis. It required adults in certain professions get vaccinated, including hospital and nursing home workers, soldiers, firefighters, and police, as well as medical students. People over the age of 60 were also required to get the COVID-19 vaccine.

The European Center for Disease Prevention and Control reports that almost 63% of Czech people have been fully vaccinated.

“Even though vaccination is the most efficient weapon against serious forms of Covid-19, we do not want to force anyone,” Health Minister Vlastimil Valek said on Twitter.

In January, protests were held in the nation’s capital Prague after the mandate was announced.

“The protesters gathered at Wenceslas Square in central Prague to question the effectiveness of the current vaccines and reject the vaccination of children before marching through the capital, chanting ‘Freedom, freedom,’” per ABC News.

Fiala’s government has allowed healthcare workers and social services personnel to work if they test positive for COVID-19 but are asymptomatic. The government also shortened quarantine and isolation times.

“Hospitalizations, which peaked in the latest Delta wave at more than 7,000 in early December, dropped to 1,635 on Tuesday from 1,761 reported for Monday,” reports The Guardian.

Czech workers are required to take part in a mandatory COVID-19 testing program that launched this week amid a surge of cases attributed to the omicron variant. 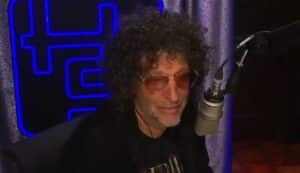 Howard Stern Says Unvaccinated People Should Be Turned Away From Hospitals, 'Go Home and Die'