The EU has accused RT of promoting the policies of the Kremlin and disseminating disinformation in order to win support for Russia’s invasion of Ukraine. It suspended the broadcaster in March as part of a series of sanctions against Russia due to the war in Ukraine.

In their July 27 ruling, the judges dismissed every accusation brought against the EU by RT.

The judges found that the EU’s sanctions covered “large-scale” pro-invasion operations without violating freedom of the press because of the role modern “audio-visual media” plays in modern society. The court dismissed the allegation of lack of competence brought against the EU.

The judges also found that RT’s right to be heard was not violated because of the “exceptional context and extreme urgency” of the ongoing war.

“The General Court finds that the condition that the limitations on the freedom of expression must be laid down by law is satisfied,” the court stated. “The General Court adds that the nature and extent of the temporary prohibition at issue comply with the essential content of the freedom of expression and do not call that particular freedom into question.”

The court affirmed that the EU’s ban protects “public order and security, which are threatened by the systematic propaganda campaign put in place by the Russian Federation [through] media outlets controlled by the Russian leadership” and act within its right by “putting in place a series of restrictive measures with the ultimate aim of exerting pressure on the Russian authorities to bring an end to the military aggression against Ukraine.”

The complaint was originally brought by RT France, which alleged the EU’s ban was in violation of its right and constituted a form of discrimination.

The General Court dismissed the discrimination claim, stating that RT France “failed to identify any other category of persons who would have been treated more favourably when in a situation comparable to its own, namely being under the direct or indirect control of the leadership of the Russian Federation.”

Dmitry Peskov, the press secretary for President Vladimir Putin, said the ruling was an attack on free speech and that Kremlin will apply pressure to Western media outlets that work in Russia.

“We will not let them work in our country, and there will be no soft position here,” Peskov said, per EuroNews. He added, “Europeans are trampling on their own ideals.”

According to AFP, “many foreign journalists have left Russia and a number of foreign media outlets suspended their operations in the country after authorities introduced prison terms of up to 15 years for spreading ‘fake news’ about the Russian army.”

Under the ban, RT cannot operate, authorize, transmit or distribute content in any of the 27 nations that belong to the bloc. In addition to RT France, the Russian broadcast channel operated RT English, RT UK, RT Germany, RT France, and RT Spanish.

According to the EU, the ban on RT will remain in effect until the outlet stops its disinformation campaigns and until the end of the Russia-Ukraine war. 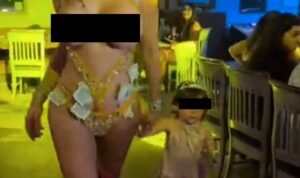