Congresswoman-Elect Anna Paulina Luna Says She is ‘Polar Opposite’ of AOC, Squad Members

'I Think Their Message Is One Of Hate And Division, And Mine Is One Of Unity And Common Sense’

“I do think that my ideas are better than theirs, and I also think I am way more qualified than they are,” Luna told the Daily Wire in reference to AOC and “the Squad” largely. “I think their message is one of hate and division, and mine is one of unity and common sense. I am their polar opposite.”

“But I also think Charlie’s right in the sense that I am a younger representative. I think I’m actually the youngest Republican female representative in the conference,” she said regarding Kirk’s comparison. “I think that I’m very relatable, which is important for younger generations.”

Luna said she “looks forward to having discussions” with members of “the Squad.”

“I think the things that they would typically revert back to, especially with identity politics, I don’t think that it works the same against me,” said Luna, who “looks forward to having discussions” with “the Squad.”

“So we’ll have to have real discussions. How are they gonna tell me that I’m anti-immigration or that I’m racist or that I haven’t served or that I don’t know what it’s like to experience all these things?” Luna continued, noting her background of Mexican descent. “I’ve literally grown up in the most abnormal circumstances. I am immune from it, I guess.”

“We are the largest voting minority in the country,” said Luna, commenting on Republican gains with Hispanic voters. “I think conservative media really needs to start talking to these people, because the fact is the Left is now pivoting from the issue of the black vote, and they’re now focusing solely on the Hispanic vote. They’ve basically bought up all of our conservative media in Miami-Dade, they started to launch ‘fact-checking’ operations against conservative Hispanic influencers online saying that they’re pushing disinformation.”

Part of the reason why the Hispanic vote went so red is a majority of us are entrepreneurs, small business owners — we have doctors, lawyers, congressmen. But when you have leadership in the DNC like Nancy Pelosi calling us ‘crop pickers‘; things like having Jill Biden refer to us as ‘breakfast tacos,’ that doesn’t sit well with anyone. I mean, it’s just insulting. A lot of people, especially those who’ve fled communism and socialism, saw what was happening with the Biden administration choosing to allow massive illegal immigration, but knowingly turning away people from Cuba that had general claims for political asylum, because they’re being prosecuted in their countries — I think that these are all factors as to why the vote went so red.

Luna further insisted the GOP should prioritize their focus towards Hispanic outreach, adding herself and other Hispanics were raised in the Catholic faith and therefore do not support abortion and other typically “far-left” policies. 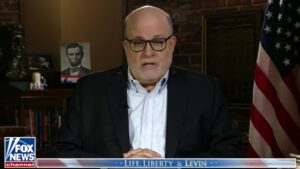 Mark Levin: There Was Never Going to Be a 'Red Wave'