Congressman Nehls: If We Can Spend $40 Billion on Ukraine, We Should Be Able to Spend Money on Securing Our Schools

Congressman Troy Nehls has introduced public safety legislation that he believes will help secure our schools and communities.

Rep. Nehls introduced the Public Safety Enhancement Act of 2021 (PSE) in December, but believes that it is more important than ever as the nation mourns another senseless school massacre.

Our government needs to start investing in the safety of Americans.

That is why I introduced the Public Safety Enhancement Act to add 100,000 more law enforcement officers to our communities including officers that will patrol our schools. https://t.co/Vw25p3a26m

The legislation would provide grant funding to hire an additional 100,000 police officers within the next five years, including more to patrol schools, and reauthorizes a portion of then-Senator Joe Biden’s 1994 crime bill used to combat the surge in crime by putting more officers on the streets.

“Teachers across the country are shaken up by this, they are thinking ‘are we next?’ All of their efforts should be focused on educating our children—not worrying about the security of their schools. As lawmakers, that is our job, and we must do better. My bill will reinforce the safety of our schools and bring law and order back to our communities,” Congressman Nehls told Timcast. “If we can spend $40 Billion on Ukraine, then we should be able to spend a whole lot less on securing our schools and communities.”

“Crime has ravaged our streets for far too long and it has compromised the safety of Americans,” said Congressman Nehls in a statement when the bill was introduced. “Rule of law is the cornerstone of our country, without it we fail to have a country. It has never been more important to enforce and enhance public safety. Our nation’s law enforcement departments are currently struggling amid a national crisis. They face an unprecedented rise in violent crime and a severe problem recruiting and hiring qualified police officers and deputies. This bill would reverse this troubling and ongoing trend and secure our streets.” 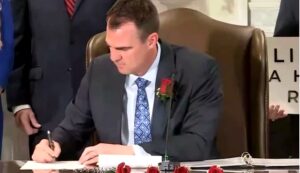