CNN falsely labeled Democrat Sen. Kyrsten Sinema a “Republican” while airing her floor speech about opposing getting rid of the filibuster.

The erroneous chyron came as Sen. Sinema is taking massive heat from the left for refusing to budge on getting rid of the filibuster, thus destroying her party’s chances of passing their voting rights agenda.

They just showed Sinema on CNN as a Republican 😂 pic.twitter.com/GszzDQoR8s

I mean it’s funny but that’s messed up 😅🤣#Sinema pic.twitter.com/mM9JBtO6cH

Sinema has previously faced fire from her party over not supporting the “Build Back Better” spending package.

While speaking on the floor about voting rights efforts, Sinema said, “while I continue to support these bills, I will not support separate actions that worsen the underlying disease of division infecting our country.”

It is currently unclear if the chryon was a mistake or a political protest from someone at CNN. Given the nature of discussion about the senator on the network, it does appear most likely that it was the latter.

The network had not apologized or commented on the mistake by time of publishing. 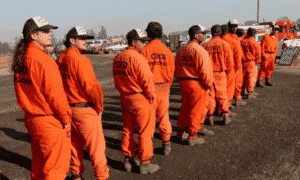 'Thousands' Of Federal Inmates To Be Released Under First Step Act