Judge Chambers was appointed to the United States District Court for the Southern District of West Virginia by former President Bill Clinton in 1997.

In his decision, published on Wednesday, Judge Chambers wrote that part of the reason that the state cannot exclude sex change surgeries because the policy covers other treatments related to transgender healthcare, including psychiatric diagnosis evaluations, psychotherapy, counseling, and hormones.

The judge also argued that vaginoplastys, for example, can be done for biological women for “congenital absence of the vagina,” and therefore it should be covered for transgender people as well.

Ultimately, he decided that excluding sex change surgeries “invidiously discriminates on the basis of sex and transgender status” and violates the equal protection clause of the Fourteenth Amendment, the Medicaid Act, and the Affordable Care Act.

West Virginia was sued in 2020 by Lambda Legal on behalf of two transgender individuals who were denied coverage of sex change surgeries by West Virginia’s state employee health plan and Medicaid.

In the lawsuit, Lambda Legal argued that Christopher Fain, a biological woman who is now a transgender man, requires “a bilateral mastectomy as medically necessary care to treat his gender dysphoria and eliminate the need for the ongoing use of a binder.”

A bilateral mastectomy for the purpose of sex change operations is the removal of typically healthy breasts from the patient’s body.

Other plaintiffs in the lawsuit are couple Zachary Martell and Brian McNemar.

“The denials of coverage for Mr. Martell’s care have caused his spouse, Mr. McNemar, intense frustration, despair, and aggravation,” the lawsuit alleges. “Mr. McNemar not only experienced the distress of watching his spouse suffer without coverage for essential medical care, but also the distress of being discriminated against in his compensation. Other cisgender state employees receive coverage for their spouses’ hormone-related therapy and surgical care, while Mr. McNemar is denied that important form of compensation simply because his spouse is transgender. This harms Mr. McNemar by depriving him of equal compensation for equal work, causes him distress, and stigmatizes both Mr. Martell and Mr. McNemar.”

It is currently unknown if the defendants will appeal the decision. 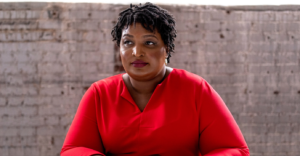 Stacey Abrams: 'It is Lethal to Be Pregnant in Georgia If You Are a Black Woman'