Ebenezer Baptist Church, home of senior pastor Georgia Senator Raphael Warnock, is reportedly evicting tenants for late rent while paying the Senator over $7,000 in housing allowance, according to a Tuesday report.

The church owns 99 percent of the property in partnership with Columbia Residential and the remainder of the 96-unit Columbia Tower at MLK Village in downtown Atlanta, GA. The complex describes itself as a home for the chronically homeless and mentally disabled according to the apartment’s application. Audited financial statements show Ebenezer reportedly closed the 2021 fiscal year with cash and “cash equivalents” over $1.2 million.

Ebenezer, which has only paid $77.77 in property tax since 2015 because of their charitable operation classification, was awarded $5 million in residual COVID-19 funds to renovate the complex by Georgia Governor Brian Kemp in August. Total past-due rent is $4,900 including one tenant owing $28.55, according to lawsuits from the complex.

Besides garnering a $120,000 salary from the church, Warnock also reportedly receives over $7,000 in housing allowance, according to the Washington Free Beacon.

NEW: Records obtained by @FreeBeacon reveal Raphael Warnock’s church, which pays him a $7,417 monthly housing allowance, secretly owns a low-income apartment building that tried to evict residents during the pandemic.

Complex residents were unaware of the partnership between Columbia Residential and Ebenezer Baptist Church, the outlet noted.

“They treat me like a piece of s—. They’re not compassionate at all,” said Vietnam veteran Phillip White who received an eviction notice from the complex for failing to pay $192 in rent for the month of September. White was previously served an eviction notice in September 2021 though the case was dropped after he repaid past-due rent on top of $325 in fees, the outlet reported.

“It’s disheartening. It’s horrible. It’s actually horrifying,” said one resident who was also served an eviction notice after missing her rent by one day due to a bank miscommunication. “We need the help. I understand churches take care of their pastors, but the excess, it’s not good. Not when you have people that need help here. … It was devastating and surprising. I know they have the ability to be patient with me and let me pay my rent. And it was paid,” the resident said. “I asked for patience, but I was totally ignored.”

A total of eight residents owing on average $125 in past-due rent have been served eviction notices since 2020, five of which resulted in lawsuits by the complex seeking rent less than one month late. The complex’s first pandemic-related eviction was filed just months before Warnock went after his Republican Senate challenger incumbent Kelly Loeffler for not supporting COVID-19 eviction moratoriums.

“Pandemic unemployment benefits and eviction protections will expire this month. And it’s all because @Kloeffler and Senate Republicans refuse to fight for families. Pandemic relief is at stake in the #GASen race. #GASenDebate #VoteWarnock,” the Georgia Senator previously tweeted in late 2020.

Pandemic unemployment benefits and eviction protections will expire this month.

And it's all because @Kloeffler and Senate Republicans refuse to fight for families.

Pandemic relief is at stake in the #GASen race. #GASenDebate #VoteWarnock

Former Columbia Residential CEO Noel Khalil, who passed away in October 2021, had reportedly donated $14,000 in support of Warnock’s 2020 Senate campaign and subsequent runoff, according to Federal Election Commission (FEC) reports.

Warnock’s knowledge of Ebenezer’s evictions is unclear though the Senator has not responded to the outlet for comment as of Tuesday afternoon. The Georgia Senator will face off against Republican challenger and former NFL star Hershel Walker in November. 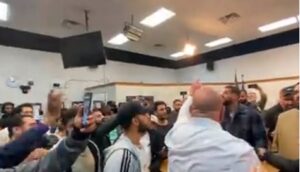