Chuck Grassley Will Seek His Eighth Re-election to the Senate

Senator Chuck Grassley announced he would be seeking re-election for the eighth time Friday morning, ending rumors of his possible retirement.

“Before I start the day I want you to know what Barbara and I have decided,” the Iowa native posted on Twitter.

It’s 4 a.m. in Iowa so I’m running. I do that 6 days a week. Before I start the day I want you to know what Barbara and I have decided.

I’m running for re-election—a lot more to do, for Iowa. We ask and will work for your support. Will you join us? #GrassleyRuns #GrassleyWorks pic.twitter.com/cwv8yu9wkx

He also shared an image of himself giving a thumbs-up with the slogan “the senator we need is the senator we’ve got.”

“The chairman of the Senate Judiciary Committee, Grassley has played a key role in helping confirm conservative federal judges as well as Supreme Court justices. Polls taken before his announcement show him with a comfortable lead over Democratic challenger Abby Finkenauer,” per Yahoo! News.

The 88-year-old currently serves as the president pro tempore of the Senate. He has previously dismissed the idea that his age could be a challenge.

“What’s more of a factor is my ability to do the job,” he told The Gazette in December of 2020. “I’m working just as hard now as I did when I was 40 years younger.”

Finkenauer, Grassley’s Democrat challenger, argued that the Iowa politician has been in office for too long.

“I’m Abby Finkenauer, and I’m running for U.S. Senate because Iowa — and our Democracy — are worth fighting for,” she wrote in her campaign announcement on Twitter. ”After 46 years in DC, @ChuckGrassley has lost touch with both.”

Grassley’s decision not to retire “avoids an additional roadblock for Republicans hoping to reestablish a party majority in the Senate during the 2022 midterms,” according to NPR.

One of only two active farmers currently serving in the Senate, Grassley began his political career in 1958 when he was elected to the Iowa state legislature. He was a member of the U.S. House of Representatives in 1974 until he became a Senator in 1980. He is known as a staunch conservative with a track record of bipartisan collaboration. 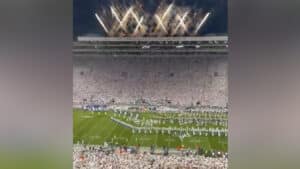