Chinese Communist Party Seeks to achieve military parity with the U.S. by 2049

China just launched a next-generation aircraft carrier on June 17, the first to be designed and manufactured within the country.

The nation’s third carrier — named Fujian — is more technologically advanced than its former efforts. And like modern United States carriers, it uses electromagnetic catapults (rather than ski-jump style ramps on its other two carriers) to launch aircraft off the flight deck.

This vessel marks a significant upgrade to China’s naval capabilities, according to the Center for Strategic & International Studies.

Collin Koh, a research fellow at Nanyang Technological University in Singapore, said it could be a “game changer” for the Chinese navy.

“The conventional flight deck with (electromagnetic catapults) will at least in theory allow the carrier to launch aircraft faster and with heavier payloads — which constitute key deciding factors during battle,” he reportedly told global news agency Agence France-Presse (AFP). “At a strategic level, the new carrier heralds the coming of age of a blue-water PLA Navy.”

China’s groundbreaking new carrier is part of a modernization effort in a longstanding, three-phase strategic plan by the Chinese Communist Party (CCP) to achieve military supremacy by the year 2049 — the 100th anniversary of the founding of the People’s Republic of China.

This goal is known as “the great rejuvenation of the Chinese nation.”

The U.S. Department of Defense is taking such a long-term goal by the CCP seriously. The Pentagon, in a 2021 report, wrote: “The PRC’s strategy aims to achieve ‘the great rejuvenation of the Chinese nation’ by 2049 to match or surpass U.S. global influence and power, displace U.S. alliances and security partnerships in the Indo-Pacific region, and revise the international order to be more advantageous to Beijing’s authoritarian system and national interests.”

American military planners aren’t the only ones who have sounded the alarm on CCP geostrategic ambitions.

“Phase One would see the Chinese military compete with the United States from a position of technological inferiority,” according to a report from Robert O. Work and Greg Grant, Distinguished Sr. Fellow and Adjunct Sr. Fellow (respectively) at the Center For a New American Security. They assert that Chinese military writings in the late 1990s and early 2000s sought ways to defect a technologically superior adversary, “until such time that their modernization efforts were able to narrow the advantages enjoyed by the U.S. military.”

Phase Two occurs when the Chinese begin to establish technological parity with the U.S. in “guided munitions and battle network warfare,” a step they say will make it more likely China can deter a U.S. military attack in the East Asian sea. It’s the stage where they assemble a world-class military and “assume a leading position within the international order.”

The third phase is when the Chinese military reaches technological superiority over the U.S. military, enabling them to disburse U.S. forces.

The report states: “China’s leadership has laid out its goals for a fully modernized PLA by 2035, and elevating the PLA to the world’s premier military force by the 100th anniversary of the People’s Republic of China in 2049, one capable of winning informatized wars.”

Based on its own internal documents, China is thinking long-term in its military planning. And the debut of an advanced aircraft carrier that can project power into international waters and rival U.S. vessels is simply another step along a path to matching, or surpassing, the U.S. as the world’s prevailing superpower by the year 2049. 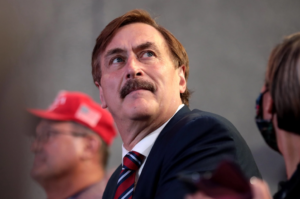