'AI may help detect a mistake, but it cannot replace humans in making a decision,' one prosecutor opined

Researchers claim that China has developed an artificial intelligence prosecutor that can charge people with crimes with more than 97% accuracy.

The AI-driven machine can identify dissent against the state and suggest sentences for supposed criminals, removing people from prosecution. It is an attempt by China to efficiently handle crime and reduce the cost of processing criminals within the justice system.

There are already fears the Chinese Communist Party could weaponize the system. Human prosecutors are concerned about who would take responsibility for the AI’s decisions.

The new technology can file a charge based on a verbal description of the case. It was built and tested by the Shanghai Pudong People’s Procuratorate, China’s most prominent and busiest district prosecution office.

Running on a desktop computer, the system would press charges based on 1,000 “traits” from human-generated case description text. The details of the system were reported by the South China Morning Post.

The AI has been “trained” using 17,000 real-life cases from 2015 to 2020. According to its creators, the system can identify and press charges for the eight most common crimes in Shanghai.

The hope is to expand the system to recognize more types of crime and file multiple charges against one suspect once it is upgraded.

AI technology already exists in many forms of law enforcement, but this is the first time it will be used to press charges. The most common form of AI used in law enforcement is image recognition to identify people, locations and information provided through video and photographs.

The newly developed AI prosecution system has no role in decision-making and does not suggest sentences.

The South China Morning Post reported that one prosecutor in Guangzhou says he has concerns.

“The accuracy of 97% may be high from a technological point of view, but there will always be a chance of a mistake. Who will take responsibility when it happens? The prosecutor, the machine or the designer of the algorithm? AI may help detect a mistake, but it cannot replace humans in making a decision,” the prosecutor said.

The Chinese government has continued to rely on AI technology to boost its productivity and maintain its place as a technology leader worldwide. 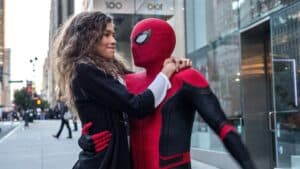 'Spider-Man: No Way Home' Breaks $1 Billion in Under Two Weeks