China Arms Subs With ICBMs That Can Reach the U.S. West Coast

U.S. Officials Have Not Previously Acknowledged The Weapons Were In Service

China has deployed new intercontinental ballistic missiles (ICBMs) on six of its nuclear powered submarines, allowing it to target the continental U.S. from further distances.

Analysts have said that the longer range, submarine-based ICBMs give China a credible nuclear deterrent and second strike capability against enemies.

U.S. officials have not previously acknowledged China has had the long-range weapons on its subs and some China experts suspect the U.S. is making the announcement to boost military spending.

Wei Dongxu, a Beijing-based military expert, told the Global Times the U.S. seeks to deploy more anti-submarine assets to the West Pacific and develop more advanced subs. He says that hyping the “China threat” will push congress to allocate more funds for the U.S. military.

China began testing the JL-3 back in 2019, but officials say testing of the weapon was not aimed at any particular country.

“China always adheres to a national defense policy that is defensive in nature and a military strategy of active defense,” Ren Guoqiang, China’s Ministry of National Defense spokesperson, said in a white paper released at the time. “The development of weapons and equipment aim to serve the basic needs of safeguarding China’s national security.”

Other China experts, however, note that long-term ambitions of the Chinese Communist Party (CCP) necessitate that military development and foreign policy objectives are crafted with the U.S. in mind.

“The CCP has a 100 year plan against the United States. They want to defeat America. The slogan they use is, we live, you die,” Joshua Philipp, investigative reporter and China expert, told Timcast in an interview.

He added, “And that’s the role of government that’s antithetical to what the CCP represents and antithetical to the way a lot of these groups want to move the world. Really, the American idea is a shot over the bow to every totalitarian system on Earth.” 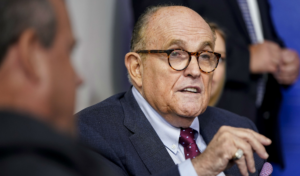 INTERVIEW: Rudy Giuliani 'Heartbroken' Over What Pro-Crime Leftists Have Done to NYC