A suspect in a child pornography investigation drove to a police station in North Carolina and shot himself in the head inside his vehicle, according to law enforcement.

Tracy Allen Knight had been arrested by the Statesville Police on Friday after the department received a cyber TipLine report from the National Center for Missing and Exploited Children regarding five files of child pornography.

Knight’s body was found slumped over his steering wheel in the department’s parking lot shortly before 1 p.m. on Sunday.

Prior to his apparent suicide, the department had released a statement saying that while executing a search warrant at his residence, officers found “numerous items of evidence” linking Knight to child pornography.

“On September 24, 2021, members of the Statesville Police Department, the State Bureau of Investigations (SBI), Mooresville Police Department and ICAC task force members executed a search warrant at 346 Euclid Avenue, Statesville, NC. During the search of the residence, numerous items of evidence were seized linking Mr. Knight to child pornography,” the statement said.

Knight was taken into custody and charged with three counts of 3rd Degree Child Exploitation, with additional charges pending.

The investigation was ongoing.

“On September 26, 2021 around 12:50pm, Statesville PD Officers observed a vehicle in the parking lot of the police department at 330 S Tradd St that appeared to be running with the driver slumped over the steering wheel. Upon entering the vehicle to make contact with the male subject, officers observed that he was suffering from a gunshot wound to the head that appeared to be self-inflicted. Officers advised dispatch to request EMS to respond to the scene, and upon arrival, the male subject was declared deceased,” the department said in a statement posted to Facebook. “The victim was identified as Tracy Allen Knight of Euclid Ave, Statesville. The initial investigation has confirmed that the victim died of a self-inflicted gunshot wound.” 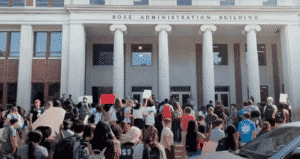