The Foundation for Individual Rights in Education (FIRE) says the results of their “2021 College Free Speech Rankings” report are “concerning.”

The annual report ranks U.S. schools from best to worst for students in terms of their ability to freely practice their First Amendment rights.

The report found that “students showed much greater intolerance for campus speakers with conservative positions,” that “racial inequality, abortion, and gun control top the list of most difficult subjects to discuss,” and “students are most uncomfortable expressing their views on social media or when engaging in a public disagreement with a professor.”

In an interview with Timcast, FIRE Senior Research Fellow Sean Stevens said the results of the rankings are “concerning.”

“I’ve spent all of time on university campus,” Stevens said. “I got a PhD in social psychology and taught many classes and think it’s disingenuous to argue that everything’s fine and there’s no problem.” Even at the schools that do well in terms of the freedom of speech index, Stevens said “there are things you can look at and say: You can do better here.”

Over 80% of students reported self-censoring their viewpoints at their colleges at least some of the time, with 21% saying they censor themselves often. More than 50% of students identified racial inequality as a difficult topic to discuss on their campuses.

“I know a lot of professors and I’ve taught a number of college classes,” Stevens said. “I personally doubt any professor out there is going into a classroom with the intention of creating an intidimating atmosphere. However, the data we have suggests that a notable portion of students feel intimidated in the classroom [and] don’t want to disagree with their professor.”

He added: “That is an indicator that some things need to be done differently. Maybe we should not dismiss claims that this is … a moral panic or a manufactured crisis. I think we are well beyond that.”

Stevens said FIRE College Plus is an organization similar to YouGov but exclusively for college students and campuses.

“The reason we work with them is they are currently the only place that can tell us which colleges the responses are actually coming from,” he said.

FIRE also partnered with RealClear Education, which is under the umbrella of the RealClear media company, to conduct the survey which ran from Feb. 15 to May 30. Stevens said each school only took a couple of weeks to survey.

The 159 schools surveyed include all the Ivy League institutions and top-ranked US News colleges — both public and private — and this year FIRE expanded to include a few liberal arts colleges and the two biggest academic institutions in each state. Last year, they only surveyed 50 schools.

“We were originally going to do 150 but then we have individual private donors who wanted to have certain schools surveyed and they donated funds to have those 9 schools surveyed,” Stevens said. “Our goal was to get 250 students surveyed at every school which gives about a 5 percent margin of error.”

Stevents noted that the College Pulse uses the National Center for Education’s statistics so the data is weighted to be as close to the national weight as possible.

There are five schools on FIRE’s list that received a ranking but not a score. Instead, these schools received a “warning rating” in FIRE’s speech code policy assessment because they do not promise free speech.

“We don’t recommend going to those schools because they explicitly do not promise free speech,” Stevens said. “These are Baylor, Brigham Young, Pepperdine, St. Louis and Hillsdale and four of the five actually score pretty poorly when you look at their overall scores. And while Hillsdale scores well, our assessment of their speech policy is they explicitly do not promise freedom of expression. They have a warning rating from our speech policy.”

He said the schools that received the warning rating indicate in their policy that they place other values over freedom of expression.

FIRE’s report identified the key topics that students had a difficult time discussing in an open and honest manner. The top five topics at both “Warning” and “non-Warning” schools were identical: Racial inequality, transgender issues, abortion, gun control, and the George Floyd protests.

“When you consider base rates of faculty political affiliation and what ideas they present versus what ideas they don’t present — and this could all be unintentional — but there’s all this political and social psychological data that indicates that our politics influence those things,” Stevens said. “No one is completely unbiased so when you don’t get presented with viable alternative perspectives, you wind up thinking this perspective is the correct one and I think that’s very problematic.”

Stevens said FIRE’s data shows that most of the college students at the schools they surveyed “identify as slightly, somewhat or very liberal. But, there are a few schools where conservatives are in the majority. They’re not massively in the majority and Hillsdale is the exception. Basically, three-quarters of their student body … identified as conservative and at those schools you see the same thing but kind of the flip side where it’s the liberal students that feel they have to self-censor. [This is] broadly a problem with how our country has fallen into a lot of partisanship and partyism and our data reflects that in a lot of ways, too.”

Stevens said he noticed that younger faculty tend to be more on the left than older faculty and this is stronger among graduate students, particularly in social sciences and humanity. Despite this, Stevens said he sees an uptick in students who are identifying as conservative.

“I think even though there’s a lot to be concerned about, there are some encouraging signs in this data,” he said. “There are some schools that do a good job — and sure they could be doing better — and I point out that a number of those are state universities and they are not nearly as expensive as private schools are … And I think you can see in our data that most of the schools that do well are these state schools.”

In September, FIRE launched another research project which they are calling the “Scholars Under Fire Database.” It’s a 30-page report that identifies incidents where scholars — including professors, graduate students and research fellows — were targeted as a result of their free expression.

“We think the cases that we have identified are just the tip of the iceberg,” Stevens said. “This is just another data point of there being an indication that there is a growing problem with speech and expression on campus.” 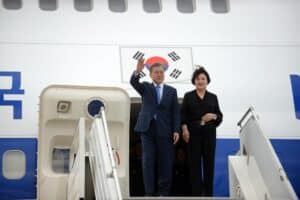