The program was announced as part of the city's $16.7 billion spending plan

Lightfoot has said the program would help hard-hit, low-income households in need of additional economic stability.”

“This cash benefit plan for our residents, if approved, will be the largest in the history of the United States,” Lightfoot said in a statement.

For one year, the families would receive a monthly payment of $500. The money would be distributed on debit cards and is intended for necessities such as food, clothing, and rent.

The city is slated to receive nearly $1.9 billion in federal relief funds, which Lightfoot wants to use to fill budget holes in the coming years as Chicago sees increasing pension costs.

Alderman Gilbert Villegas, who may be a mayoral challenger in 2023, had previously proposed a similar universal basic income program. He believes Lightfoot should have adopted the plan in April when it was initially proposed.

“We could have been months into this pilot. People have been hurting for months,” he tweeted.

“They say imitation is the greatest form of flattery” It’s unfortunate that this was introduced back in April and now just being accepted by @chicagosmayor when we could have been months into this pilot. People have been hurting for months. pic.twitter.com/aSDvj84fyD

In April, “Villegas said he [had] studied similar proposals in several California cities including Stockton and St. Paul, Minnesota [and] Chicago’s one-year pilot program could be funded by federal aid but could continue in future years through a combination of philanthropic and city revenue.” His proposal was then “referred to the city council’s Committee on Rules, which adds uncertainty for its trajectory,” according to Bloomberg.

Additionally, “critics have said such universal basic income programs, which have been championed by some progressives for years, remove the incentive for recipients to seek work, and give people money to spend on vices such as drugs and liquor,” reports The Chicago Tribune.

Chicago would not be the first city in the nation to test out payment programs intended to help lower-income families. The mayor of Los Angeles, Eric Garcetti, proposed a $24 million income assistance program as part of next year’s budget. The city has an estimated 2,000 low-income families.

Chicago is the third-largest city in the  United States with approximately 2.7 million residents. The city council would need to approve the plan before it is adopted. 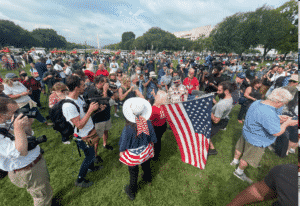 Protesters Gather in DC to Demand Justice for Demonstrators at the Jan. 6 Riot