Chicago Mayor Lori Lightfoot gave a profane speech at the city’s annual Pride event over the weekend, in which she took aim at Supreme Court Justice Clarence Thomas.

Speaking to the crowd on Saturday, Lightfoot lashed out about the Supreme Court’s ruling to overturn Roe v. Wade and hand decisions regarding abortion laws back to the states.

The crowd erupted in cheers following her statement.

Lightfoot, the city’s first openly gay mayor, continued, “he thinks that we are going to stand idly by while they take our rights, our right to marry, our right to have children.”

In his opinion, Justice Thomas wrote that Supreme Court decisions that relied on “substantive due process” should be reconsidered, including “Griswold, Lawrence, and Obergefell.”

The justice wrote that, “because any substantive due process decision is ‘demonstrably erroneous’ … we have a duty to ’correct the error’ established in those precedents.” However, he acknowledged that the cases he provided as examples “are not at issue” in the Roe ruling.

Lightfoot also spoke at Planned Parenthood Illinois’ offices in the hours after the Supreme Court’s ruling was announced on June 24.

The mayor spoke of how she remained as outraged that day as she did when the draft opinion leaked and asserted that Chicago will remain a safe haven for people to come from out of state to get the procedure.

“I’m not going to tell you that today feels any less than what it felt then, but the thing I think that time and distance has given us is resolve,” Lightfoot said. “We’re here not only to voice our opposition in our outrage to the Supreme Court’s decision but to reassure our brothers and sisters all across the country that Chicago and Illinois will remain a safe haven for all who value justice in our country.”

Lightfoot scolded people for electing Donald Trump in 2016, blaming that election for the conservative justices being appointed to the court.

“However you feel today, don’t feel resigned. Feel resolved. Feel resolved to fight and to organize and importantly to vote,” Lightfoot said. “If Hillary Clinton had been the president, we wouldn’t be sitting here having this horrible outcome in our country. If we had stood up and voted in the 2016 election, the horror of Donald Trump that we are still living through would not be something that we have to experience.”

In May, after Thomas’ draft opinion on Roe leaked to the media, Lightfoot issued a “call to arms” on Twitter. 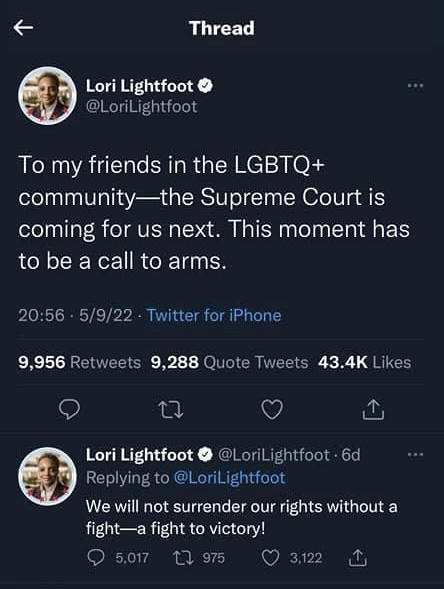 “To my friends in the LGBTQ+ community—the Supreme Court is coming for us next,” she said. “This moment has to be a call to arms.”

“We will not surrender our rights without a fight—a fight to victory!” Lightfoot added.