'They're Saying That Everyone Who's Gay Is Grooming Kids To Have Sex With Them; They're All Pedophiles'

Uygur said he knew what to do.

“That is bigotry defined,” Uygur continued. “She pushes hatred for a living.”

“This is what she does. Twenty-four/seven [she] puts out hate into the world,” Uygur continued. “She said it’s part of an agenda; they’re all groomers.”

The Young Turks host continued questioning what children were being groomed for by suggesting Raichik was unfamiliar with “how evil the right wing” was.

“They’re saying that everyone who’s gay is grooming kids to have sex with them; they’re all pedophiles,” Uygur said, appearing to reframe Raichik’s original comments. “She’s disgusting.

Raichick, who’s identity was previously exposed by the Washington Posts’s Taylor Lorenz, noted she was apolitical prior to the COVID-19 pandemic.

“COVID, for me and I think for a lot of people, really woke people up,” she said. “It was like an awakening. Either you can stay sleeping … or you can choose to get involved.”

Raichik further noted she became aware of videos discussing the sexualization of children during the pandemic, saying she felt a need to disseminate the information.

“Specifically teachers … there are also parents, activists, doctors,” she said in regards to videos she reposted from TikTok. “That is the most scary part about it.”

Raichik noted she was able to educate people on social media activists and influence legislation while remaining anonymous.

“I think I’ve done all I can and I’m ready for the next step,” she said, suggesting remaining anonymous was hindering her ability to further “fight” activists. “I think I’ll be a lot more effective when I’m not so anonymous anymore.”

Carlson referred to Raichik’s work as journalism saying she “had an effect” by exposing activists’ content. 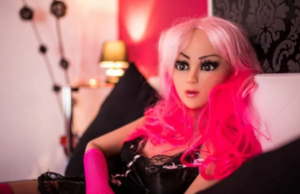