Officials worried virus could ‘mushroom out of control’

New York may already have several hundred asymptomatic cases of polio according to officials from the Centers for Disease Control and Prevention.

Dr. José Romero, director of the CDC’s National Center for Immunization and Respiratory Diseases, warned in an interview that the presence of polio previously reported by Timcast in July indicates that there may be “several hundred cases in the community circulating.”

According to Romero, since most of those infected with poliovirus are asymptomatic, the spread is “silent.” Insisting that there is not just one, but “a number of individuals in the community infected with” the virus, Romero is among a number of experts voicing growing concern about the possibility of an epidemic.

CNN’s Elizabeth Cohen spoke off-record to a number of “community leaders” practicing medicine in Rockland County who claim that a CDC team was recently dispatched to assess the risk. One of the individuals who met with the team said that they were worried the highly communicable disease could “mushroom out of control” in densely populated New York.

Public health officials in New York are urging the unvaccinated to get up to date with their polio vaccination and for those who have not received all recommended boosters to do so promptly.

Meanwhile, authorities in London are now recommending children ages one through nine take a polio vaccine booster following indications from sewage samples that the virus is continuing to spread. In June, London first announced that evidence of the virus shedding had been detected in a water treatment facility.

Polio paralyzes less than one percent of the children it infects and spreads through contact with infected feces. The wild variant that once paralyzed and killed millions has been nearly eradicated following a global vaccination campaign. 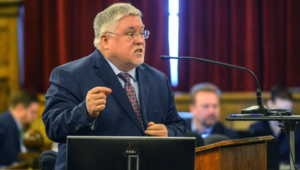