The company initially set a Jan. 4 deadline for workers to get fully vaccinated

Workwear and outdoor apparel brand Carhartt will still require workers to get vaccinated despite the Supreme Court’s ruling which invalidated the Biden administration mandate.

The popular brand employs approximately 3,000 people in the United States.

In an email sent to employees on Jan. 14, Carhartt CEO Mark Valade said an “unvaccinated workforce is both a people and business risk” that his company “is unwilling to take.”

“We put workplace safety at the very top of our priority list and the Supreme Court’s recent ruling doesn’t impact that core value,” wrote Valade. “We, and the medical community, continue to believe vaccines are necessary to ensure a safe working environment for every associate and even perhaps their households.”

Carhartt required employees to be fully vaccinated by Jan. 4. Some locations were granted deadline extensions and have until Feb. 15 to get the vaccine. A number of employees have been granted medical and religious exemptions to its vaccine policy, Valade told CBS MoneyWatch.

The Supreme Court ruled on Jan. 13 that the Occupational Safety and Health Administration did not have the authority to enforce a mandate from President Joe Biden that required companies with more than 100 employees to stipulate workers get vaccinated or submit to testing protocols.

“Although Congress has indisputably given OSHA the power to regulate occupational dangers, it has not given that agency the power to regulate public health more broadly,” the court wrote in its decision. “Requiring the vaccination of 84 million Americans, selected simply because they work for employers with more than 100 employees, certainly falls in the latter category.”

The Biden administration subsequently called on businesses to enforce the mandate anyways.

The Michigan-based apparel company was founded by Valade’s great-grandfather Hamilton Carhartt in 1889 and made denim overalls for railway workers, per Forbes.

A copy of Valade’s email was shared on social media. Employees were instructed to email [email protected] with any questions.

Whiles some Twitter users applauded the company for its pro-vaccine stance, others called for Americans to boycott the brand.

I have a lot of @Carhartt stuff and I will definitely be buying more. Companies that value their employees safety and well being will always win my money over companies that do not. pic.twitter.com/Ix5tFyfJ1N

Wow @Carhartt is subjecting their employees to medical abuse. Very bad look. Definitely should stop buying their products if you do pic.twitter.com/OyBdzQjwIK

Look at @Carhartt taking a stand to protect their workers and the American people!! Thank you @Carhartt!! pic.twitter.com/IglJsJ9HXH

I spend thousands a year on @Carhartt hoodies, jackets & winter gear. Today that ends. I guess I am looking for alternatives. Seriously, this is insane given their target market. I am done purchasing any of their stuff and giving them thousands in free advertising. pic.twitter.com/kyHaNwlO6c

People who actually wear Carhartt aren’t doing some stupid boycott because they have real work to do. #BoycottCarhartt 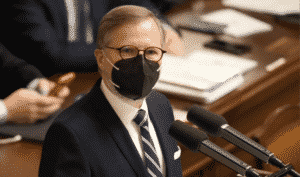