California and Illinois Declare States of Emergency Due to Monkeypox

'California is working urgently across all levels of government to slow the spread of monkeypox,' said Gov. Gavin Newsom

California and Illinois became the second and third states in the nation to declare states of emergency due to the national spread of monkeypox.

Gavin Newsom, the governor of California, announced on Aug. 1 that his government would be increasing vaccine access and leading education efforts in order to address the illnesses spread.

“California is working urgently across all levels of government to slow the spread of monkeypox, leveraging our robust testing, contact tracing and community partnerships strengthened during the pandemic to ensure that those most at risk are our focus for vaccines, treatment and outreach,” he said in his announcement.

More than 25,000 doses of the smallpox vaccine that is used to combat monkeypox have already been distributed by health officials in California.

“The state’s response to monkeypox builds on the infrastructure developed during the COVID-19 pandemic to deploy vaccine clinics and ensure inclusive and targeted outreach in partnership with local and community-based organizations,” Newsom’s office noted. “The state allocates doses to local health departments based on a number of factors, including the number of reported monkeypox cases in an area and estimate of at-risk populations.”

According to the Centers for Disease Control and Prevention, the majority of cases caused by the current outbreak have been among gay, bisexual, and other men who have sex with men. The agency is working to use specific channels and messages to reach gay and bisexual men directly.

There are currently over 5,000 confirmed cases of monkeypox in the U.S. Only Montana and Wyoming have not reported cases as of Aug. 2.

CDC data indicates there are 827 monkeypox cases in California. New York is the current epicenter of the national outbreak with 1,390 cases.

New York Governor Kathy Hochul declared a state of emergency in response to the steady rise of cases on July 29. In her announcement, Hochul said the government would “strengthen [its] aggressive ongoing efforts to confront this outbreak.”

“More than one in four monkeypox cases in this country are in New York State, and we need to utilize every tool in our arsenal as we respond,” said the governor.

She added that it is “especially important to recognize the ways in which” the global monkeypox outbreak is “having a disproportionate impact on certain at-risk groups” and vowed that her government is “working around the clock to secure more vaccines, expand testing capacity and responsibly educate the public on how to stay safe during this outbreak.”

As part of her Executive Order, Hochul expanded the list of people eligible for the vaccine to include EMS personnel, pharmacists and midwives and mandated vaccine data be sent to the New York State Health Department.

Illinois currently has the third largest number of confirmed monkeypox cases in the country – 520 – and is also now under a state of emergency.

The state’s Department of Public Health has advised residents to “remain calm” and called the outbreak a “rapidly changing situation.”

“If you have symptoms, stay at home, wear a mask, and cover lesions to protect others,” the department stated.

Symptoms of monkeypox include fever, headache, swollen lymph nodes, chills, and a painful, itchy rash on the genitals, anus, mouth, feet, or chest. 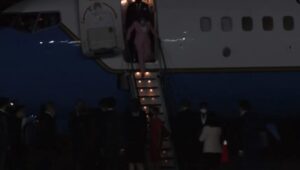