Infowars host Alex Jones commented on his interview with rapper Ye during a Tuesday appearance on Steven Crowder’s podcast Louder with Crowder.

Crowder said it seemed like Jones was “holding on for a bumpy ride” during last Thursday’s interview with Ye, formerly known as Kanye West. The Infowars host said he was hoping to cover larger issues including fentanyl, human trafficking, and bringing jobs back to America though didn’t want censor Ye.

“I thought he was joking at first,” Jones said. “He got out of the vehicle in the [Balenciaga] gimp mask … I didn’t know what to say.”

Ye briefly took the mask off to confirm who he was to Jones, who said the rapper was “super high on adrenaline.”

The Infowars host insisted he didn’t know Nick Fuentes, who is advising Ye in his 2024 Presidential bid, was sincerely a “Nazi lover,” before diving into a diatribe about the German dictator, saying there was a “Hitler fetish.”

“I felt like I was sucked into a giant publicity stunt,” said Jones who noted fellow pundits suggested the Infowars host agreed with Ye’s sentiments.

“I love George Washington, I love Thomas Jefferson, I love American strength, and freedom, and power, and Christianity, and open societies, and capitalism and free speech, and I want it back now!” the Infowars host yelled, pounding his fists on the desk.

“So burn in hell Hitler, and Stalin, and Mao! Burn in hell!”

Throughout Jones’ interview with Ye, the rapper made a myriad of controversial statements saying he didn’t think “evil” should be associated with Nazis and that he “liked” Hitler. Ye also referred to his mother’s death and Michael Jordan’s father’s murder as “Zionist sacrifices.”

Jones, who appeared visually uncomfortable at times, pushed back by suggesting the rapper was making “shocky” statements to which Ye rebutted “Hitler has a lot of redeeming qualities.”

Ye also acted out a fake conversation with Israeli Prime Minister Benjamin Nentanyahu using a fish net as a prop as a play on the Prime Minister’s last name.

Later in the segment, Ye said he wanted to read “jokes” sent to him by comedian Owen Benjamin. The jokes took aim at Daily Wire host Ben Shapiro, who is open about his Jewish heritage and faith. The jokes played on Jewish stereotypes, suggesting Shapiro could tell how much money someone had by the sound of change jingling in their pocket. 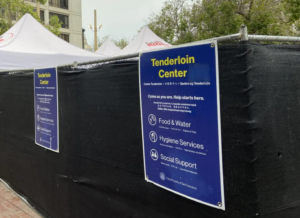