Tim Pool: "I have a feeling they will cancel the Olympics..."

The 2020 Olympic Games finally began, a year late, in Tokyo on Friday — after months of indecision, new cases of the Coronavirus, and protests by angry locals outside the stadiums.

A furious crowd of 50 demonstrators chanted “No to the Olympics” and “Save People’s Lives!”

At least 80 foreigners have already contracted COVID at the games, forcing officials to reschedule a few competitions.

According to leaders in Tokyo, 80-percent of all athletes are vaccinated, but less than 15-percent of the Japanese population is vaxxed. A majority 62-percent of the locals want the games delayed another year and 6,000 doctors have signed a petition urging the government to cancel the event.

Here's the protest just outside Olympic Stadium in Tokyo, which is easily audible inside during quiet moments pic.twitter.com/AUQQrTDjcF

“Protesters’ shouts from outside the arena gave voice to a fundamental question about these Games as Japan, and large parts of the world, reel from the continuing gut punch of a pandemic that is stretching well into its second year, with cases in Tokyo approaching record highs this week: Will the deep, intrinsic human attachment to the spectacle of sporting competition at the highest possible level be enough to salvage these Games?” reports the Associated Press.

“We cannot think it’s rational to host the Olympics in the city this summer,” wrote a Japanese Newspaper. “We Demand PM Suga Decide Cancellation.”

“Distrust and backlash against the reckless national government, Tokyo government and stakeholders in the Olympics are nothing but escalating. We demand Prime Minister Suga to calmly evaluate the circumstances and decide the cancellation of the summer event.”

The Tokyo 2020 Games will award 339 medals across 33 sports at 42 venues across Japan. The country has already spent $15 billion to host the global competition. 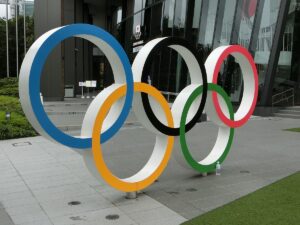