'And As An Actual Fat Gay Person, I Feel Like My Life Doesn’t Need To Be A Metaphor For Somebody Else’s Pain' Said Branum

Bros actor Guy Branum criticized fellow actor Brendan Fraser’s portrayal of an obese gay man in The Whale in an interview with Pride.

“I think that the source material of The Whale is problematic. I think that it’s trying to use extreme fatness as a metaphor for gay pain,” said Branum in the interview. “And as an actual fat gay person, I feel like my life doesn’t need to be a metaphor for somebody else’s pain.”

The Bros actor continued, “I also have real problems with the fact that they cast a straight actor who is not very fat, and [who] used prosthetics to represent fatness, in the film. I think it allows people to talk about that character as an object in a way that wouldn’t be possible if it were an actual fat person who you had to look in the eyes.”

“I think that the source material of The Whale is problematic. I think that it’s trying to use extreme fatness as a metaphor for gay pain" https://t.co/GXa8dOu1Li

“We all want Brendan Fraser to have a great comeback. We all want this moment for him,” Branum concluded. “But we also need to think about how much we are representing queer life and fat life through straight actors or prosthetics.”

Black Swan and The Wrestler director Darren Aronofsky’s new film The Whale, based on Samuel D. Hunter’s 2012 play of the same name, stars Fraser as the story’s main character Charlie, a 600-pound middle-aged gay man who attempts to reconnect with his 17-year-old daughter years after abandoning the family for his lover who passed away. While the film was met with criticism for Aronofsky’s decision to cast Fraser in a “fat-suit,” audience members gave it a six-minute standing ovation as Fraser broke down in tears at the film’s premiere at the 79th Venice International Film Festival on Sept. 4, Variety reported.

“I developed muscles I did not know I had,” Fraser told journalists. “I even felt a sense of vertigo at the end of the day when all the appliances were removed; it was like stepping off the dock onto a boat in Venice. That [sense of] undulating. It gave me appreciation for those whose bodies are similar. You need to be an incredibly strong person, mentally and physically, to inhabit that physical being.”

Though Fraser has appeared in a handful of roles, The Whale marks Fraser’s return to a starring role since 2013’s Breakout.

“Hollywood has often been very accepting on the surface but very homophobic underneath the surface and very hypocritical,” said Bros star and co-writer Billy Eichner noting his film’s negative reception after release, Page Six reported. “And a lot of decisions have been made based on fear — fears that I think are often irrational — and yet, people were scared. You know, a lot of it was based around what they think the mainstream audience would or would not accept. And that’s pretty infuriating when you think about it.” 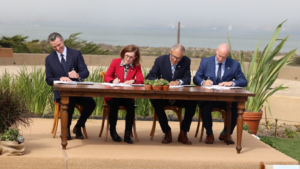