For the first time in nearly three decades, the United States House of Representatives has passed an “assault weapons” ban.

The legislation passed with a 217-213 vote and was aimed at banning the “sale, import, manufacture, or transfer” of multiple types of semiautomatic rifles, as well as high capacity magazines.

“Along with so many colleagues and advocates, we fought long and hard to get the assault weapons ban the stand alone vote it deserved,” House Rep. Alexandria Ocasio-Cortez wrote on Twitter shortly after the bill’s passage. “This is a victory.”

Along with so many colleagues and advocates, we fought long and hard to get the assault weapons ban the stand alone vote it deserved. This is a victory. https://t.co/1cTNde87lK

The bill, H.R. 1808, was supported by two Republicans and opposed by five Democrats.

House Democrats were set to tie the bill to other police funding legislation, but backtracked after progressive members of the Congressional Black Caucus objected, according to the Huffington Post.

The text of the legislation lists multiple styles of rifles in common use, and even the names of specific rifles and their manufacturers, that would be banned. The law would exempt firearms obtained lawfully before its passage.

“Today, the House of Representatives passed H.R.1808, which would, if enacted, criminalize the lawful and constitutionally protected conduct of millions of Americans,” the Second Amendment advocacy group Firearms Policy Coalition (FPC) said in a statement.

Today, the House of Representatives passed H.R.1808, which would, if enacted, criminalize the lawful and constitutionally protected conduct of millions of Americans. https://t.co/r8m4KuoGfx

“In a time of economic recession, gross overreach and abuse of power by the federal government, and cascading governmental policy failures at all levels, 217 depraved representatives, including the deciding votes cast by Republicans Jacobs (NY) and Fitzpatrick, voted to violate natural rights and our Constitution, choosing to promote policies that would imprison peaceable people who have done no wrong,” the group’s press release stated. “There is no world in which American gun owners bend the knee and comply with this evil legislation. Further, if H.R.1808 is enacted, FPC Law will swiftly and aggressively take all actions necessary to fight and enjoin the bill.”

The last time the House passed an “assault weapons” ban was in 1994. The bill had a 10 year sunset provision and was not renewed in 2004.

“Democrats are once again showing their racism. As more Black people have purchased firearms in record numbers over the last few years, we see MORE of a push to ban the very firearms that Black folks are buying,” Maj Toure, founder of Black Guns Matter (BGM), told Timcast.

BGM is a community-based organization focused on de-escalation and firearm safety training.

“Violent crime (outside of spikes by Antifa and BLM) is DOWN as more guns are being bought, but democrats have yet again pretended that this is about stopping ‘weapons of war’ on our streets, as ACTUAL weapons of war are EXEMPT from this legislation. Why? Because as we know, ALL gun control is rooted in racism and stopping Black people from arming themselves safely and responsibly. So here comes the false narrative to limit the MILLIONS of new Black gun owners. Nevermind the second amendment and ACTUAL human rights, the Democrats want guns out of the hands of Black people.”

The U.S. Department of Justice conducted a study on the efficacy of the legislation and determined that there was “no evidence of reductions in multiple-victim gun homicides or multiple-gunshot wound victimizations.”

A final report published by the DOJ also showed “no discernible reduction in the lethality and injuriousness of gun violence, based on indicators like the percentage of gun crimes resulting in death or the share of gunfire incidents resulting in injury.”

The gun control bill is expected to stall in the Senate, where it will need 60 votes to overcome the filibuster rule. 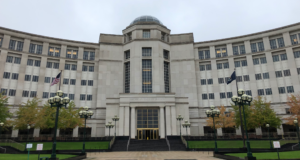