The Justice Department is looking into former President Donald Trump’s actions as part of a criminal probe of efforts to “overturn 2020 election,” according to a new report.

The department is also looking into Trump’s role in the events that took place at the Capitol on January 6.

Citing anonymous sources said to be familiar with the matter, the Washington Post reported on Tuesday that, “prosecutors who are questioning witnesses before a grand jury — including two top aides to Vice President Mike Pence — have asked in recent days about conversations with Trump, his lawyers, and others in his inner circle who sought to substitute Trump allies for certified electors from some states Joe Biden won.”

Breaking news: The Justice Department is investigating President Donald Trump’s actions as part of its criminal probe of efforts to overturn the 2020 election results, according to four people familiar with the matter. https://t.co/mcjN3EhmAO pic.twitter.com/uqIlRgEhcK

“The prosecutors have asked hours of detailed questions about meetings Trump led in December 2020 and January 2021; his pressure campaign on Pence to overturn the election; and what instructions Trump gave his lawyers and advisers about fake electors and sending electors back to the states, the people said,” the Post reports. :Some of the questions focused directly on the extent of Trump’s involvement in the fake-elector effort led by his outside lawyers, including John Eastman and Rudy Giuliani, these people said.”

No former president has ever been charged with a crime in the history of the United States.

In an interview with Lester Holt, which is scheduled to air on Tuesday’s episode of NBC Nightly News, Attorney General Merrick Garland said that Trump announcing a 2024 campaign will not impact any investigation into “events surrounding January 6” or “for any attempt to interfere with the lawful transfer of power from one administration to another.”

Garland pledges to hold accountable anyone “criminally responsible for the events surrounding Jan 6, for any attempt to interfere with the lawful transfer of power from one administration to another” pic.twitter.com/1J041nB5eH

“We intend to hold everyone, anyone, who is criminally responsible for the events surrounding Jan. 6 — for any attempt to interfere with the lawful transfer of power from one administration to another — accountable,” Garland said. “That’s what we do.”

Editor’s Note: this article has been corrected to reflect that it is unclear who the focus of the investigation is. 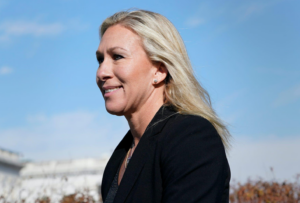